Stripped of emotion in a seafood market

Stripped of emotion in a seafood market 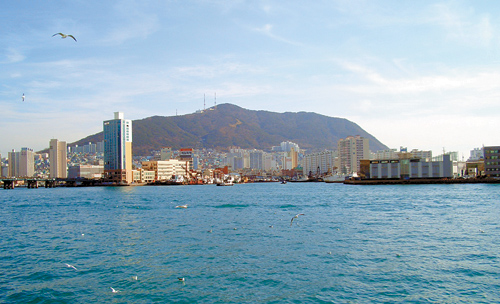 1st Day Gwangan Grand Bridge, stretching for over 4.6 miles was white, majestic and inviting but it could have been a dark tunnel as far as I was concerned. The longest bridge in Korea, it connects the two busiest areas of Busan ― Busan station and Haeundae Beach. It marked the true beginning of my escape from Seoul but it was apparent that I was going to need some time to adjust. 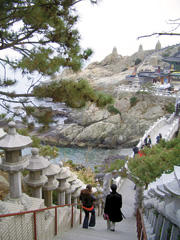 Throughout a tumultuous week my trip had been waiting for me like an oasis, but now, being overtired, my sulky expression sowed seeds of anxiety in the eyes of the cab driver, Shin Min-ho, who was taking me and my companion to our destination, the Paradise Hotel. “Why the long face young lady? Hey, look at the water. Isn’t it pretty this time of year?” said Mr. Shin. He announced that it was our lucky day because, by his estimation, he gives the best “unofficial tours” of Busan. “On clear days, you can see Tsushima [a Japanese island near the Korean peninsula] on your right,” he said, midway across Gwangan Bridge. “And there is the Yachting Center. You can borrow boats and sail but you need good arm strength.”
Busan, about five or six hours by bus from Seoul on the southern coast of Korea, is usually four or five degrees Fahrenheit warmer than the capital, making it a great winter destination. It is the second largest city in Korea, a fact that’s obvious from the scene near Busan station, where department stores with gleaming windows stand chock-a-block with multiple branches of Starbucks.
We arrived at the lobby of the Paradise Hotel after a 30-minute, 11,000 won ($12) cab ride with Mr. Shin. The hotel is one of two Korean members of the “The Leading Hotels of the World,” a five-star alliance that lives up to its reputation with private, modern rooms and a location at the heart of Haeundae Beach. Unpacking our bags, we celebrated our arrival with a can of Asahi beer each from the mini bar in our room, reminding each other to fill it up again with identical beers from a nearby convenience store. 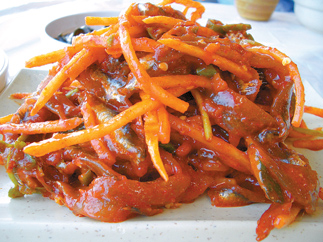 It was around two o’clock in the afternoon and we were quite hungry. We headed northeast, towards the Gijang area, a 20 minute drive from the hotel. We wanted their famous seaweed and sardine sashimi. After walking along a row of restaurants, we stopped at one that looked appetizing. The sardines arrived in a spicy red pepper paste.
They were fresh and wrapped in damp seaweed, a side dish provided by the restaurant. With a tall, clear window overlooking the harbor, we managed to chat and giggle for almost three hours. Feeling guilty about allowing most of the day to escape without any sightseeing, we decided to visit Haedong Yonggung temple on our way back to the hotel.
The temple was built by the monk Naong who was a consultant to King Gongmin during the 14th century when the country was hit by a drought. Naong dreamed one day that a sea god appeared and said that if he built a temple at the edge of Mount Bongnae, the country’s hardships would gradually disappear. I don’t know if the temple has done its job as intended, but it was quite picturesque, sitting atop the mountain on a cliff, overlooking the sea.
After a quick stroll around the temple along with other visitors who were praying in the sanctuary and drinking from the fountain of good luck, we went back to our hotel to sip some wine and enjoy the view of the beach and nightlights from our oceanside room. 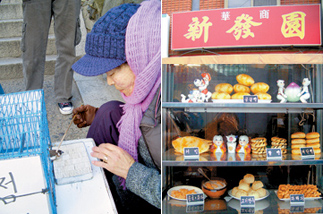 
2st Day
I woke up happy the next day almost drowning in the hotel’s creamy satin sheets. With a bit of a hangover from the wine the night before, I led my sleepy companion to get some fresh sashimi from the Jagalchi Seafood Market (www.jagalchimarket.org), which was renovated last year. This is the nation’s biggest seafood market and was developed from a seafood company that the Japanese formed in 1889 to represent their fishermen in Korea. In 1922, the Busan Fishery Industry Organization built a building to sell the fish caught by the seafood company. The building, overlooking the main harbor, was designed to look like seagulls taking flight from its roof. 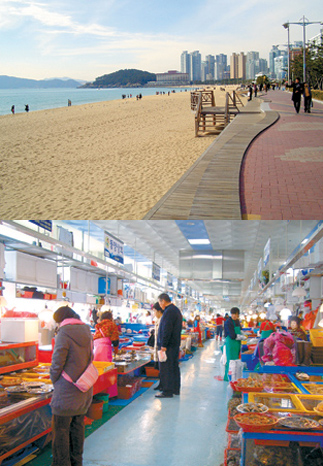 Greeting us were hardcore scenes. Dozens of ajumma were chopping live fish and taking out various internal organs with their hands sheathed in bright red rubber gloves. Although the market still seems rough, I thought back to three years ago when I first paid a visit. It was like recalling a completely different world. Compared to 2004, when I saw dirty floors splattered with fish blood, the place now looked clean, like a small department store devoted to fish. The first floor, which is where the merchants sell live fish from buckets or small aquariums, was divided into sections with signs for each one, including dried fish, shellfish and abalone.
The vibrant yelps of the merchants and the energy of the place reinvigorated my spirit, which had begun to wither again. Here was a simple life or death situation with no emotions, the dying fish flapping in small pink buckets while customers waited in line for the merchant to split them in half so they could take them upstairs and eat them as sashimi along with shots of soju. The market was black or white, crude and vulgar. I found it refreshing.
We bought flatfish sashimi along with some abalone and oysters. After some bargaining, the merchant asked for 30,000 won and we took the fish up to the restaurants on the second floor, where ajumma served the sashimi we had bought with side dishes and sauces. This service cost an extra 8,000 won per person. For 5,000 won the ajumma take the leftover fish head and bones to make maeuntang (hot pepper fish stew).

We next went to Yongdusan Park, the oldest in Busan, to walk off our big meal. The park was built in 1678 and is at the top of Mount Yongdu. The climb was quite a workout. Midway up, where people feed pigeons, there was a little old lady tapping a sparrow with a narrow wooden stick. The sign posted on the birdcage read saejeom, meaning bird fortune-telling. The lady taps the bird to make it pick out a fortune card with its beak from a stack under the cage. The service costs 500 won. “Pick a good one,” the lady said. The paper the bird picked for me read “Relax and reflect quietly upon what effect you are having on the people around you. Reflect and relax and fortune and good shall come to you.” It read like a lazy Zen-talking haiku-rip- off that someone might write on a holiday card but nevertheless, I thought the concept was charming.
Our last stop was Shanghai Street, right next to the Busan train station from where we would take the KTX train in less than an hour. I had heard that there was an old Chinese bakery named Shinbalwon (051-467-0177, 051-465-9509), that Chinese immigrants had first opened over 60 years ago. We decided to pay a visit and pack things to eat on the train ride back to Seoul. A sturdy- looking man greeted us as we walked in. Situated next to larger Chinese and Indian restaurants on the street, it is a small place with four tables and a humble looking kitchen. The man (who turned out to be the owner) said that his grandfather started the restaurant and that he is now running it with his daughters.

“We specialize in dumplings and desserts. If you want, we also do overnight deliveries to Seoul if you buy 10,000 won worth or more,” he said in Korean, in a friendly tone, with a bit of a Chinese accent. The dumplings, as we later found out, were amazing ― far better than the ones I had previously eaten in fancy restaurants. I said goodbye to the owner and promised I’d order from Seoul.
Half an hour later, I stood on the platform at Busan station, waiting for the train with a bag full of dumplings and bread. I remembered Mr. Shin’s comment and tried to recall if I had really seen Tsushima from his cab. I hope that next time it will be clear enough for me to be sure.