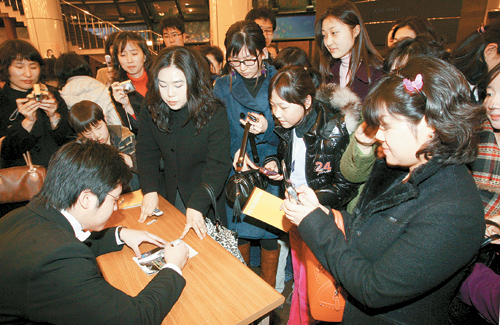 Pianist Kim Sun-wook, one of a number of newly popular classical musicians, signs autographs after a concert at the KBS Hall in Yeouido Thursday evening. By Kim Seong-ryong

A throng of 200 young fans waited within KBS Hall in Yeouido Thursday night. When the star appeared, girls screamed and furiously snapped pictures on their cell phones.
Their quarry was not a movie star or a teen idol, but rather the 19-year-old classical pianist, Kim Sun-wook. He is one of a number of young, good-looking classical music artists who are now getting star treatment that had almost been unheard of previously in the industry.
“The power of the fans is amazing,” said Cheong Koo-seong of the KBS Symphony Orchestra. “We really felt the ‘Kim Sun-wook effect’ from ticket sales.”
According to KBS Symphony Orchestra, 1,000 tickets were reserved in advanced. That is more than six times the average of 150 tickets for the orchestra’s other concerts in the same concert hall.
Mr. Kim is not the only rising star in the classical world.
Lim Dong-hyek, 23, formed the first such fan club in 2005. It now has 42,000 members. It began after he and his brother, Lim Dong-min, 27, jointly placed third at the 15th International Frederick Chopin Piano Competition in Warsaw in 2005. Today, about 300 people visit the younger Lim’s fan Web site each day. They exchange information about upcoming performances, buy tickets and leave comments.
International award-winning violinist Kwun Hyuk-joo, 22, said recently a stalker had been calling him 10 times a day.
Music critic Chang Il-beom said students seem to be trying to differentiate themselves from the saturated fan clubs of Korean pop music.
The classical music industry has been taking notice. “When we were holding Mr. Kwun’s recital, we considered giving discounts through his fan clubs,” said Lee Mi-ran, of Chongdong Theater in Seoul. “Entertainment companies will now be aware of the fan clubs.”
On Thursday in Yeouido, most of the crowd was under the age of 18. Ten posters of Mr. Kim were torn from the wall. Kim Jin-joo, 16, a middle school student, has Mr. Kim on the screen of her mobile phone and carries a photo of him in her wallet. “When other students talk about teen idols in Korean pop in school, I listen to Chopin,” Kim Jin-joo said.
“We really had a hard time trying to physically pull fans away from Kim,” said Chung Hyeok-jin of the KBS Symphony Orchestra.