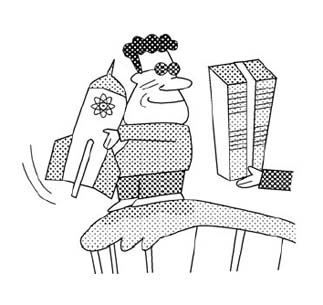 One way to persuade a person to do something is to use both carrots and sticks. Carrots are rewards given in return for performance of a desirable act. Sticks are a punishment for the failure to perform as desired.
There have been many studies regarding which is more effective, but none have produced a conclusion that is strong enough to settle the issue.
Recently, with regard to educating children, carrots have been seen as more effective than sticks, but that’s not always the case. A child should suffer some kind of punishment when its behavior is antisocial. Children must know the difference between right and wrong. If they are rewarded for good deeds and bad they will have no incentive to become law-abiding citizens.
In general, carrots are used to encourage positive acts while sticks are used to counter undesirable behavior.
In economic terms, carrots are called incentives. By rewarding desirable acts it is hoped that people become motivated to repeat these acts in the future. Incentives used by companies to reward profits are a good example. Meanwhile, when trying to prevent bad acts, disincentives are appropriate. If bad behavior is rewarded with unpleasant consequences people are encouraged to refrain from such acts.
These days, the government gives incentives to those who have lots of children. In the past, however, the government did the reverse.
Last week, an agreement was reached during the six-party talks in Beijing. People maintain that the introduction of incentives was a major change. North Korea will receive rewards in return for the gradual abolition of its nuclear development program.
A South Korean government official explained that this was also a form of disincentive, because North Korea will suffer the disadvantage of not receiving rewards if the agreement is not implemented.
But to be more precise, this is not a disincentive, but an incentive. Not getting rewards is certainly not advantageous. But North Korea does not have these rewards at present. A true punishment would be more sanctions if they fail to implement the agreement, not the absence of rewards not yet given.
Committing the undesirable act of developing nuclear weapons and then demanding rewards for not committing further transgressions is the criminal act of a bully in an alley.
To give incentives for criminal acts that have already been committed is unlikely to prevent or correct bad behavior by the North.