A place where every pan tells a story

A place where every pan tells a story 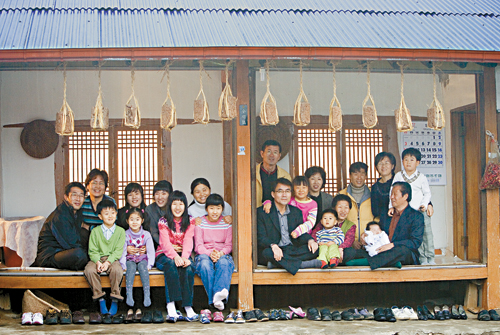 Kim Myung-ho (foreground, far right) with his family, including the new grandchild in his lap, in the house where he has lived for 70 years. 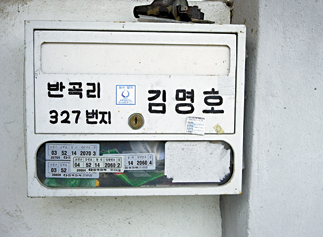 Ms. Kang cooked food everyday and delivered it to the hospital on the tray. Mr. Kim had to keep the battered object. He wanted to be reminded that his precious wife had once sold side dishes, farmed, cleaned and delivered food to the hospital.
Young-ja has always been the model of an eldest daughter. She worked and studied at the same time. At 24, she met her husband, Yun Yong-su, a civil servant. Mr. Kim and his wife said their first son-in-law is “a decent man,” who always prepares bottles of makgeolri (rice wine) for holidays.
“Our first son-in-law likes to drink. He also likes to give things to other people, and when he was working in a district office, he always delivered a bottle of makgeolri. I still ask whether he needs another bottle,” Ms. Kang said.
The second daughter was smart and had integrity. They were as proud of her but also worried about her. “After she graduated from high school, she wanted to go to college. It was a tough time in the economy and I said to her, ‘There is a work I have considered for you. You can work there.’ But she didn’t want to do that, no matter what. She had to pay her tuition by 11 a.m. that morning. If we didn’t pay the tuition, I thought we would ruin her life. There was no way. We had to borrow the money,” Ms. Kang said.
Young-ok, the second daughter, began working. Her parents wanted her to get married before it was too late, but her daughter was stubborn. “I was in agony because she didn’t get married until she was 36 years old,” Ms. Kang said. Young-ok is now married with two children, and is dedicated to her parents. Ms. Kang said her first daughter-in-law, Seo Young-ran, was very bright. “She is good with housework. In the beginning, I thought she was a little too big for a woman, but after some time passed, I realized she was the best daughter-in-law one could have,” she said.
The second son, Cheol-min, and his wife, Shim Mi-ae, are equally good, she said. “Cheol-min graduated from high school and worked in a factory in Suwon. He had a hard time there. One day, he said he was going to get married and gave his father 6 million won. He thought his father needed the money for his wedding. My husband replied, ‘I have money for your wedding,’ but Cheol-min would not take the money back. All our children married without asking for any money from us,” Ms. Kang said. The first son now has two daughters and one son, and the second one has one daughter and two sons.
Mr. Kim’s children all live in Daejeon, and they always gather at their parents’ house at least once a month. “My children always buy us things. We don’t need to buy clothes or medicine,” Mr. Kim said.
In return, Mr. Kim and Ms. Kang give their children rice and vegetables as well as soy sauce and gochujang (hot bean paste), which Ms. Kang makes. They also provide tteok (rice cakes), makgeolri, dried herbs and sesame seed oil whenever their children ask for supplies.
“When we leave this place, what worries me most is that we will not be able to give them these things anymore,” said Ms. Kang.