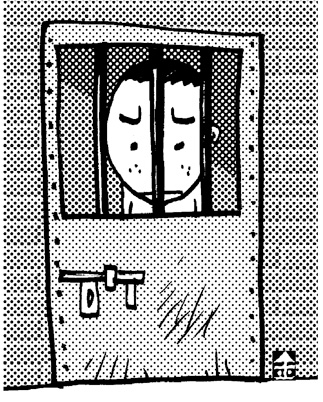 In the final memorable scene of “Angels with Dirty Faces” (1938), Father Jones intones heavily, “Let’s go and say a prayer for a boy who couldn’t run as fast as I could.”
With different fates in life, Rocky and Jerry are boyhood friends from a poor neighborhood who meet again 20 years later. Jerry is a priest who watches over street kids and Rocky has become a notorious gangster.
The street kids idolize Rocky, who is brazen even after being sentenced to death for committing a murder. Jerry visits him before the execution and asks him to die screaming, which would end the boys, idolization of him. Rocky scoffs at the suggestion, but changes his mind at the end and has to be dragged to the electric chair while screaming for his life.
Beyond this classic gangster movie, it has become common practice for the silver screen to portray reform schools in a bad light.
Small thieves end up as big thieves. Evil ringleaders are usually reform school graduates.
“Boys Town,” a movie released in the same year, made revamping the reform school system a social movement.
The story of Father Flanagan’s work with a group of disadvantaged and delinquent boys in a home that he founded touched the hearts of American moviegoers.
The movie prompted a change in American policy regarding youth protection.
Boys Town actually existed in Nebraska.
Young people today live in an era of psychological “storm and stress” and physical growth spurts.
Adults have no choice but to be magnanimous regarding the youthful tendency to stray.
When it comes to sentencing the young, it is common to view young people as “angels” (needing counseling for bad behavior) instead of “dirty faces” (giving punishment for bad behavior).
In particular, society needs to be accepting of youths in their early teens who are maturing into new bodies.
Currently, crimes committed by youngsters between the ages of 12 and 14 are delicately referred to by law as “juvenile offenses.”
The Ministry of Justice has lowered this minimum age to 10 years. Ten- and 11-year-old children can now be sent to reform schools.
Officials explain that children are maturing earlier and commit heinous crimes that are more vicious.
However, we should be wary of considering reform schools the cure-all for troubled kids -- what if families, schools and regional communities joined forces to create a Korean version of Boys Town?

The writer is the business news editor of the JoongAng Ilbo.