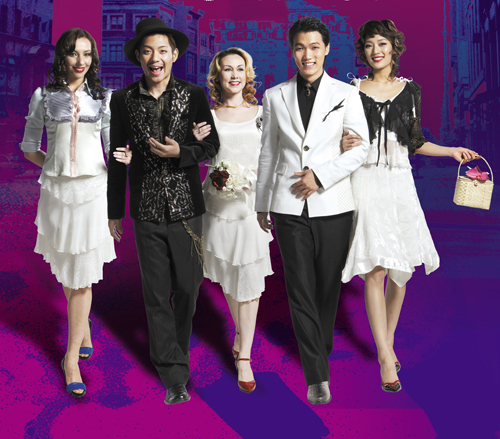 What happens when Frank Sinatra meets break dancing and flamenco? The answer is “Girls & B-boys.” The musical is Korea’s interpretation of the classic “Guys and Dolls.” The general story line follows the original, which was filmed in 1955 starring Frank Sinatra, Marlon Brando and Jean Simmons.
According to Daum C.S, the company that is staging the musical, “Girls & B-boys” is set in New York. A high-rolling gambler falls in love with a missionary, but the details after that are a little different from “Guys and Dolls.”
First, the names that fans have come to love, such as Nathan Detroit, Sky Masterson, Sarah Brown and Miss Adelaide, have been changed. Instead of Sky Masterson, the star of “Girls & B-boys,” is Gentler, and instead of Sarah Brown, the leading heroine is Cynthia. The flight to Cuba has been taken out.
Those expecting to hear Frank Loesser’s music from “Guys and Dolls” will also be in for a surprise. Daum C.S said “Girls & B-boys,” offers a new score.
Instead of musical dialogue, the Korean adaptation emphasizes dance performances. It has a variety of moves that include breakdance, hip-hop moves, jazz and tap dancing, not to mention inline skating.
The number of performers in the show is 37, including B-boys from the Ukraine and Russian dancers. The show is one-and-a-half hours long.
Tickets range from 25,000 to 50,000 won. In addition, there are eight special tables that serve wine for parties of two on the second floor. The price for the special seats is 150,000 won. The special seats will only be available starting in April.
There are three promotional events accompanying the show. The first will lower the price on all seats to 10,000 won.
The second, which runs until May 26, will hand out a real diamond through a draw. This event is sponsored by Ilias Diamond.
For the third, until April 4 anyone born in March making reservations by phone gets in free. These people must show their identification cards verifying their birthdates before entering the theater. The show plays at 8 p.m. from Tuesdays to Fridays. On Saturday there is a 4 p.m. show and an 8 p.m. show. On Sunday and holidays the show is available at 3 p.m. The musical is playing at Mesa Musical Theater in Myeong-dong, downtown Seoul.