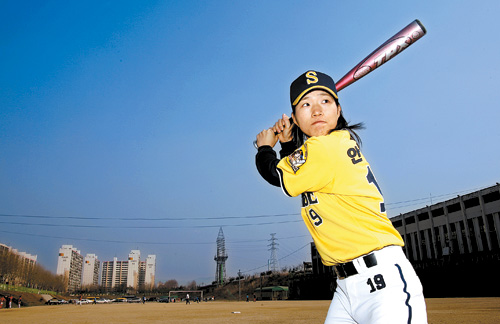 An Hyang-mi warms up before a game.

It’s spring and baseball fields throughout the northern hemisphere are throwing off winter’s cloak and echoing with the sounds of baseball. In Jamsil, southern Seoul, these sounds became increasingly raucous as two female baseball teams competed with great intensity.
The tension escalated as An Hyang-mi, 26, stepped up to the plate. With runners at second and third, Ms. An swung at the first pitch she faced and the ball flew as if it had wings, climbing high over second base and landing deep in the outfield. Her two teammates were able to cross home plate without breaking a sweat. It was just the bottom of the third and the team that Ms. An coaches, Sunrise, was already ten runs ahead of Tteodda Ball, their opponents.
Ms. An, who makes her living at her mother’s convenience store, is more than a baseball player, coach and fan. She is also the first and only woman to have been an official baseball player in Korea. As a student of Duksoo High School in Seoul she took the pitcher’s mound in 1999, during an otherwise all-male high school baseball tournament. But this was not the start of a revolution in sports ― the appearance was her first and last in an official game.
Today she is content that an official women’s baseball association, something she has dreamt about for a long time, has finally been launched in Korea. For many years Ms. An stood alone, but today she has many colleagues who share her love of baseball. There are now 16 female baseball teams in Korea with over 200 players from all over the country.
Baseball has been Ms. An’s life. She grew up with three brothers but, surprisingly, she was the only person in her family who was a baseball fan. During her childhood she rarely played with a bat or ball. Her father was a judo master and he never took her to a baseball game.
Ms. An played tennis before she took up baseball. She did not pick up a bat until she was in the fifth grade. Her father suggested that she join the little league where her little brother played so she could take care of her younger sibling. The little brother no longer plays baseball but his sister has become a minor legend. 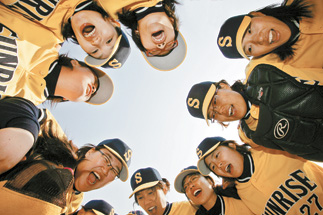 Ms. An and her teammates from Sunrise, an all women baseball team. By Ahn Yoon-soo