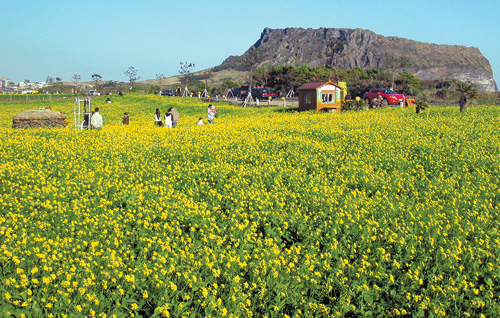 A field of rape seed flowers near Mount Seong

Far apart from the mainland, Jeju Island is an exotic place with its semi-tropical climate, palm trees and distinctive dialect.
The island is often called samdado, meaning an island with an abundance of women, wind and stone. Due to its strong winds, the island’s weather is unpredictable. Mount Halla, located in the middle of the island, blocks the wind and the clouds, resulting in differing weather conditions across the island, especially between the two largest cities: Jeju in the north and Seogwipo in the south. Seogwipo is warmer than Jeju in the winter but has more rainfall in the summer. The east coast of the island, facing the Pacific Ocean, has stronger winds than the west coast.
The island’s geographical features are very distinctive. The whinstone rocks, craters and mountains on the island were created by volcanic eruptions.
Large quantities of whinstone, hard, dark-colored rocks formed from basalt and chert, composed mostly of chalcedony, can be seen all over Jeju Island, especially on the coastal roads. Islanders have used them to build walls to protect crops and houses from the wind. They also sculpted harubang, or “grandfather statues,” with the rocks.
Jeju island is especially popular in the spring because of its flowers. Rapeseed come into bloom in early March, blanketing the island in yellow. Cherry blossoms reach their peak later in the month.
Visitors can observe rapeseed flowers and cherry blossoms when driving on the coastal road around the island. The No.12 circular route takes about four hours and is close to the seashore.
Beautiful rocks on the island’s coast are popular and should not be missed. Jusangjeolidae are formations of hexagonal stone pillars piled side by side. The sight of waves crashing against these rocks in the midst of a blue sea is spectacular. Seopjicoji is also famous for strange-looking rocks. Unlike other beaches on the island, these were formed by red volcanic ash and have been featured in many television dramas and films. Yongmeori Haean, which is roughly translated as “dragon head seashore,” is located in front of Mount Sanbang. The sandstone rocks look like a dragon holding its head and trying to jump into the sea. Caves created by erosion and high cliffs attract many tourists.
There are also many craters on top of the volcanic mountains, These are called oreum on Jeju island and there are 368 of them. The oreums have gentle slopes and come in various shapes and sizes. The most famous craters are Sangumburi (783-9900), Mount Songak and Seongsan Ilchulbong on Mount Seong. Information for Sengumburi and Seongsan Ilchulbong can be obtained by telephone at (064) 783-9900 and 783-0959 respectively.
Sangumburi has a distinctive shape with a relatively large crater compared to the size of the mountain. Unlike other craters on the island it has many trees growing inside of it. 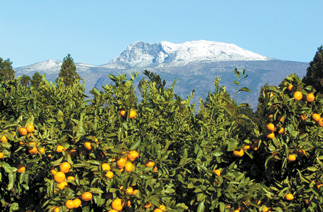 Tangerine trees with Mount Halla in the background [JoongAng Ilbo]

Multiple craters on Mount Songak were formed by a series of volcanic eruptions. From here, visitors can see the southernmost Mapa island and Mount Sanbang. Seongsan Ilchulbong also has a large crater. It is a popular place for hikers to greet the rising sun.
Baerokdam is a pond that wasformed in a crater on top of Mount Halla ― information available at (064) 713-995. Standing around it on a sunny day, people can enjoy a stunning view of the island.
People say climbing Mount Halla is the best thing tourists can experience on Jeju.
There are two different routes to reach the top of the mountain: the Seongpanak route and Gwameumsa (Gwaneum Buddhist temple) route. The first route has a shallow gradient and is 9.6 kilometers (6 miles) long. It takes four and a half hours to reach the top from the Seongpanak resting place. The latter is 8.7 kilometers long.
The climate is unpredictable on Mount Halla and there are time limits for climbers depending on the season.
For the Seongpanak trail, visitors need to reach the azalea flowerbed by 12:30 p.m. on their ascent and must descend by 2:30 p.m. Yeongsil trail is also available, although it does not lead to the top. It is recommended for first-timers because of its scenic beauty.
Jeju Island is famous for caves made by volcanic eruptions. The caves are long and wide and resemble manmade tunnels. They were created when lava flowed into the ground, forming chambers. Large pillars in the caves were created when lava dripped from the ceiling.
The three most famous caves all have information hotlines for visitors. They are Manjanggul ― (064) 783-4818 ― Ssangyonggul ― (064) 796-0001 and Micheongul ― (064) 784-2080. Manjanggul ― gull means cave ― is the world’s longest at 13 kilometers in length and it has a pillar made of lava that is 7.6 meters (24 feet) high. Ssangyonggul has some characteristics of a limestone cave, with stalactites hanging from the ceiling. Ssangyonggul is located inside Hallim Park, a botanical garden on the west coast. It has palm trees, cactuses, a subtropical greenhouse and a folk village. Micheongul is inside Ilchul Land on the east coast, a botanical garden that is similar to Hallim Park.
There are three major waterfalls on the island: Cheonjeyeon, Jeongbang and Cheonjiyeon. Cheonjeyeon waterfall, the grandest of the three, is situated in the middle of a dense subtropical forest and has three levels.
Jeongbang waterfall is high but rather small and is the only Korean waterfall that falls directly into the sea. Cheonjiyeon waterfall sits in a valley surrounded by a subtropical forest. It is also famous as a habitat for eels.

Jeju island has many museums including Jeju National Museum, the Folklore & Natural Museum, Jeju Folk Village Museum, the Seogwipo Citrus Museum, Museum of African Art, the Teddy Bear Museum, Jeju Stone Park, Jeju Loveland (a theme park devoted to sexuality) and miniature theme parks such as Jeju Mini Mini Land and Jeju Soinguk Theme Park.
Jeju Stone Park ― (064) 710-6631 ― is only one year old. It’s a unique place that displays a number of extraordinary stones collected on the island. There is an outdoor stone park as well as a stone museum. The museum has exhibits that explain the volcanic eruptions that formed the geographical features of the island and the whinstone rocks. The strange-looking rocks in the exhibition include some that are spherical and hollow. Others were created when the lava covered trees, carving the wood into bizarre shapes.
There are several places where visitors can enjoy circuses or aerial acrobatics: Jeju Magic World (746-9005), Jeju Jorangmal Town (787-2259), Happy Town (794-4444), Green Resort (792-5266). Green Resort also provides cart riding and horseback riding.
Car rentals are available at the airport. Many travel packages include car rentals. The daily rates for rentals range from 30,000 won for a sedan to 200,000 won for a convertible. Many rental cars now have navigation systems, and sometimes just typing in a phone number will provide the driver with directions to their destination.
Car rentals are available at the Jeju International Airport or major hotels. Or, for 90,000 won, taxi drivers will offer their services for an entire day. For more information, visit http://cyber.jeju.go.kr.