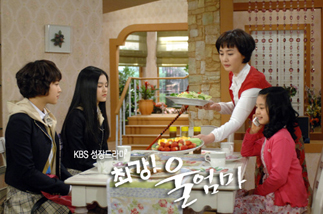 A scene from “My Mom’s the Best,” a new TV series about mothers. [KBS-TV]

There is a bitter comfort in getting old: I am learning to give up. This is rather painful to say, but I am now old enough to know that I cannot make the world the place I would like it to become. After all, it can be a cruel place, and we cannot always live up to our ideals.
It also gets tiring being hopeful when we feel the clocks of our lives ticking away fast. I once hoped I could make other people happy, but it’s already a formidable enough task to make myself happy, let alone the rest of the world.
One hope that I can hardly give up, however, is to become a mother ― a good mother. I don’t think I am necessarily cut out to be a good wife, but I am more than willing to do what is necessary to be a great mother.
My ultimate goal is to have a daughter and see her grow up and say that her greatest wish is to be like me. But this appears to be more difficult than even being the country’s president (and I know I don’t want to be president).
With my interest in motherhood, it was only natural for me to tune into the new TV series “My Mom’s the Best” on KBS2-TV one recent Sunday morning.
The 20th century Japanese novelist, Takeo Arishima, wrote, “My happiness comes from the simple fact that I have one mother from my birth, and that she is alive to this day,” in his novella, “To My Little Things.”
I feel so lucky to be able to say that I couldn’t agree more with the writer; I have a mother who has been my very best friend.
Still, this 21st century TV drama, “My Mom’s the Best,” tells viewers that it takes more than being “alive” or being a “best friend,” to succeed as a mom, as the mothers in this series are superwomen.
One seeks perfection in everything, from her career to housekeeping to educating her children.
The other is a housewife who tries to be Korea’s Martha Stewart, by decorating her house perfectly and orchestrating a perfect education for her children.
Another is a single mother who runs a small art academy. The series directors describe her as “acting like a child” because she “falls in love recklessly.”
This last mother seems the most human to me, but the directors apparently disagree.
Airing every Sunday at 9 a.m., the show defines itself as a coming-of-age story, whose mission statement is to explore the meaning of family in today’s society.
The two larger-than-life characters are based more on stereotyped images of mothers than mothers in reality.
This only reinforces the fantastic image of mothers in this still male-oriented society. I wonder if the drama truly deserves to be described as a coming-of-age series. At best, it will instill mistaken images and unrealistically high expectations about motherhood in young viewers.
Maybe this drama is the carefully calculated plan of a male chauvinist club.
Or maybe I set my expectations too high after watching a recent Japanese TV drama, which also featured a mother figure.
Titled “I Love my Mother More than Anyone Else,” the series featured an unusual household, where the mother works as a lawyer and the father is happy to be a homemaker. It realistically showed how hard it is to be a homemaker, a job usually left to mothers, using a touch of comedy.
One thing is clear: All mothers and mother figures in this world deserve hearty kudos. I should call my mom right now and tell her I love her more than anyone else and that she is the best. At least I can take something from the titles of these two conflicting dramas.