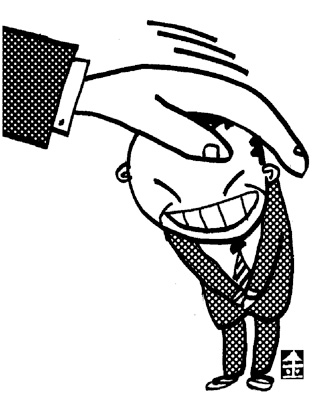 Taking a “do-nothing” and a “comfort first” approach is common for governments near the end of their term. They avoid starting new projects and avoid making any waves. This phenomenon is more acute in less popular administrations that have failed in their policies. The problem remains if they continue in this unprolific state long before the lame duck period actually begins. The power of the president is still valid, but officeholders are wary about functioning as spearheads for fear of being negatively marked by the next administration. When mired in this kind of predicament, the cardinal rule for officeholders is to feign busyness while avoiding the creation of any vulnerable points that might be exploited later.
American social psychologists Edward E. Jones and Steven Berglas referred to this as a self-handicapping strategy. People who opt for this strategy deliberately lower their abilities to perform duties and look for excuses to explain poor performance. When something goes wrong, they blame others; when things go well, they are judged as performing beyond their abilities -- it is a perfect way of self-protection. When playing golf or billiards, people who use this strategy reveal scores that are lower than their actual abilities; if they win, they have performed beyond their abilities, and if they lose, they brush it off as their usual playing level. They are not psychologically hurt when they fail and do not feel the need to take responsibility for failure. The problem with this kind of strategy remains that individual abilities actually drop. By hiding their true abilities, they avoid the danger of failure, but they come up short when the time comes for them to demonstrate their abilities. Through the process of feigning incompetence, they actually become feckless.
Recently, the cabinet ministers from the various branches of government have turned their backs on their convictions and stepped in line with the president and the Blue House. Imitating the president’s manner of speech, robotically reiterating the Blue House government briefings and imitating the president’s stern expression are the techniques of choice. Cabinet ministers who are well-informed regarding their particular fields are hiding their real abilities to keep up with an unprofessional president, casting suspicion that they are employing self-handicapping strategies. If they succeed, they can rack it up as an accomplishment, and if they fail, they can blame it on listening to the president -- they have no worries. However, it is worrisome that continuing this kind of behavior will lead to actual incompetence.