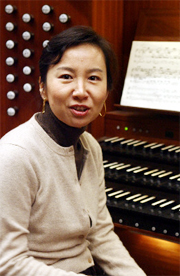 Kim Hee-sung, a pipe organist, will be performing on March 27 at the Sejong Center, downtown Seoul, to raise money for patients suffering from cancer.
Ms. Kim, a music professor at Ewha Womans University, has been holding solo performances every year for more than a decade. Ms. Kim said, however, that this concert was very different from past ones since it is the first time she is playing for the benefit of others.
Ms. Kim, in an interview with the JoongAng Ilbo, said she was holding the charity concert in memory of her younger brother, who passed away in July last year after suffering from a brain tumor.
Ms. Kim said her brother, a stock broker, passed away a year after learning about the tumor when he visited the hospital due to a severe headache.
“For six months after my brother’s death I hardly moved out of bed. I felt as though practicing the pipe organ and holding concerts were meaningless,” she said.
She has also invited 400 cancer patients to her concert.
Ms. Kim said her final piece is dedicated to all those suffering from cancer and that her performance will give them hope. She has also added Wolfgang Amadeus Mozart’s “Fantasy,” which was her brother’s favorite. Ms. Kim said her brother played the violin. “When I play ‘Fantasy’ I feel as though my brother is standing next to me,” she said.
The pipe organist stressed that this concert was about more than simply raising money for charity.
“I hope people suffering from cancer can find strength after hearing the music and other healthy audience members can understand the pain cancer patients suffer,” she said.
Ms. Kim will be performing solo in the first part of the show. In the second act she will be joined by the Prime Philharmonic Orchestra directed by composer Chang Yun-sung.
In her solo, Ms. Kim will be playing Max Reger’s “Introduction and Passacaglia,” Wolfgang Amadeus Mozart’s “Fantasy,” and G. Bizet’s “Jeux D’Enfants,” which includes “La Toupie,” “La Poupee,” “Les Chevaux De Bois,” “Trompette Et Tambour,” “Petit Mart,” “Petite Femme” and “Le Bal.”
With the orchestra, Ms. Kim will be performing Ludwig van Beethoven’s “Egmond Overture,” Alexandre Guilmant’s Symphony for Organ and Orchestra.
Ms. Kim, after getting her masters at Yonsei University, received her music doctorate from the University of Texas at Austin. She returned to Korea in 1995 and began performing as a soloist.
All profits from the concert will be donated to a leukemia aid association at the Ewha Womans University Mokdong Hospital.
Tickets range from 20,000 won to 50,000 won.
For more information call (02) 780-5054.