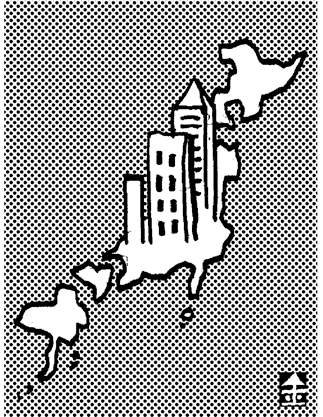 World-renowned Japanese architect Tadao Ando has been called a natural and meditative architect. He is famous for leaving concrete walls exposed and utilizing light, wind and water. He had a very modest upbringing, and instead of going to college, he traveled the world and learned through experience. He has won awards including the Nobel Prize of architecture, the Pritzker Prize.
On March 30, the design facility 21_21 Design Sight, which he designed, opened as a part of Tokyo Midtown, which opened on the same day. It is minimalism at its best with sharp steel panels and exposed concrete walls. Tokyo Midtown is a “city within a city,” offering elegant hotels, offices, restaurants, museums and parks, all a part of Tokyo’s effort to restructure the city into blocks. The new Suntory Museum of Art ― famous for collecting and showing the arts and crafts of old Japan ― reopened in Midtown as well.
Omotesando Hills opened last year and was designed by Tadao Ando. This three-story building occupied by fashion boutiques and restaurants was designated a Tokyo landmark. The project created a stir as the low-rise profile echoed the height of the Zelkova trees planted in front. The middle of the building is open as a three-story atrium and a sweeping view of the building slowly unfolds as one walks up the spiral ramps. It has become a major tourist attraction, and the property value of the area has soared by 45 percent.
Tokyo continues to unveil new buildings. The Tokyo National Art Center, which opened last January, was designed by the world-renowned Kisho Kurokawa; his work was critically acclaimed for its rippling curves and the openness of its glass construction.
The largest city redevelopment in Japan, called Roppongi Hills, opened in the spring of 2003 at the center of Tokyo. This sprawling development with luxury shops, museums, theaters, office buildings and restaurants is the epitome of a cultural complex. Richard Gluckman, who designed the Whitney Museum of American Art, participated in the project. Roppongi Hills attracted 44 million tourists in its first year.
It is interesting that real estate developers created Tokyo Midtown, Omotesando Hills and Roppongi Hills, projects that connect culture and consumption. Real estate businesses ― not the national or local government ― took the lead in the “culturalization of the city.”
Tokyo is changing. World-renowned architects are at the helm. Architecture is responsible for the cultural facade of a city. These new buildings have attracted tourists from all over the world.