[DVD Review]Cost of courage is measured in tears

[DVD Review]Cost of courage is measured in tears 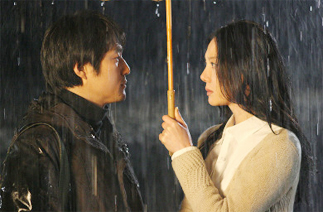 “The Old Garden” is a painful film. The audience has to watch a man suffer due to his political convictions until he hits rock bottom, knowing that history will roll right over him. The film is all the more uncomfortable because the lead character chooses impossible convictions as his destiny, while those around him get on with their lives.
The film is an adaptation of the famous novel by Hwang Seok-young, a historical epic about the Gwangju Massacre, told through the life of a student activist. Although its subject matter is political, the story uses an emotional theme as its narrative vehicle.
The film opens as Hyun-woo (played by Ji Jin-hee) is released from prison and learns that his lover has died while he was behind bars. He had been serving a 17-year sentence for admitting to a judge that he was a socialist. The movie them jumps back in time to the moment when the couple first met. The film moves between protest scenes and the peaceful countryside home where Hyun-woo hides under the care of Han Yoon-hee, an art teacher with whom he falls in love.
Like Lim Sang-soo’s other films, such as “The President’s Last Bang” and “A Good Lawyer’s Wife,” this one looks at modern Korean history with a cynical eye, although there is nothing really sensational about the story itself.
The film, unlike other Korean films about past political repression, refuses to turn itself into a political melodrama. It’s neither sentimental nor does it deal with the massacre in a direct way.
Instead it focuses on the emotional connection between Hyun-woo and Yun-hee to create the central part of the story, dealing in depth with the guilt they experience and the helplessness they feel as their loved ones suffer.
The film is painful to watch because it is so apparent from the beginning that the characters do not survive their predicaments. Yun-hee dies, leaving a diary and a painting of her family that includes herself, her mother, Hyun-woo and their daughter. When he sees it Hyun-woo realizes that the life he wanted has vanished.
Overall the film is undeniably Lim’s; there is a wealth of cynicism. For example, he depicts a group of quasi-intellectuals sharing political gossip on campus by showing their big mouths moving across the screen like drifting balloons ― a scene that’s both funny and sad.
But perhaps the most captivating scene, which encapsulates the whole point of the film, is the expression that Hyun-woo has on his face when he looks up at the night sky, halfway through the film. He has just been released from prison and he comes out of a dinner with some of his embittered fellow activists. They have been expressing their pessimism about the current government. The look of loss and sadness in Hyun-woo’s eyes is very moving.
Lim had said that the film is about the insignificance of individual conviction, and there is no doubt that this is the message it conveys.
“The Old Garden” is the story of a couple who were trying to be good people during bad times and learned the hard way that the price of their courage and resistance is their own lives.