The concierge’s guide to the galaxy

The concierge’s guide to the galaxy

Kanako Kurimoto had set her heart on seeing the musical “Rent” when she visited Korea from Japan. However, all tickets for the weekend shows were sold out a month ago. She inquired about tickets at the Grand InterContinental Hotel, where she had stayed before. Two days later she received the tickets. She was so overwhelmed with gratitude that she cried in the hotel lobby.
The lifesaver was the hotel’s concierge, Nam Jung-hee. Unlike the speaking book in “The Hitchhiker’s Guide to the Galaxy,” the work of a good concierge does has little to do with Ford Prefect or preventing the destruction of the earth. However, they are frequently required to perform improbable tasks, and the best ones are able to pull off near-miracles. They provide sightseeing tips, reserve tables in restaurants and secure seats at concerts. A good concierge can find a babysitter at a moment’s notice and dispatch a gift to a valued client.
And above all they know what to eat, where to shop and what kinds of fun tourists can have. Here are a number of spots recommended by the top concierges in Seoul. 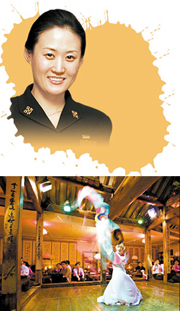 Top, Choi Jin of the Westin Chosun Hotel.Middle, Gijang Pottery, where visitors can make pots.Bottom, a night view of Busan from the Beacon tower of Mount Hwangryeong.

Serene temple food,exquisite textiles and an antique mall
Sanchon
The low hum of Buddhist prayers echoes along with the deep sound of a bronze bell. Wearing red robes, a Buddhist monk is tapping the bell in the dark while foreigners sit on the floor and watch the monk with reverence. This is not a temple in a remote mountain but a restaurant in Insa-dong, and the ritual takes place every evening.
Specializing in temple foods, Sanchon is run by the Priest Jeongsan. One of the five disgraces in Buddhism is gluttony so it’s ironic that this restaurant has been operated by Jeongsan for 26 years.
“Temple foods have a long a history as court food,” he said. “It would be a sin to see the tradition discontinued.”
Jeongsan also endeavors to disseminate temple food to a wider audience. He is the dean of the Dongsan Buddhist University’s temple food program. He is going to open a kitchen on the second floor of the restaurant to offer the public temple food classes.
Lunch is 19,800 won ($21.15) and dinner is 35,200 won. In the evening diners can watch Buddhist dances performed by monks. The show starts at 8 p.m. (02) 735-0312
Dabsimni
Located in three three yellow buildings that contain a total of 120 shops altogether, Dabsimni in Dongdaemun district is a Mecca for antique lovers.
Antique shops began moving here from Chungmuro, Ahyeon-dong, and Hwanghak-dong in the 1980s. This place is more like a traditional market compared to better known stores in Insa-dong. The shops have porcelain, folk handicrafts, old books and paintings. Take Dabsimni station, line No.5, exit 2. The shop is open from 10 a.m. to 6 p.m., except Sundays.
Korean Embroidery Museum
The private museum displays the essence of Korean embroidery. The place is well known but is very small and thus shows only a fragment of its collection. The museum has 5,000 artifacts including folding screens, cloth wrappers and personal ornaments. The museum exhibits a number of rare pieces including the oldest-known embroidery in Korea. Near Hakdong station, line No.7, exit 10. It is located on the fourth floor of the Sajeonga building. Open from 10 a.m. to 5 p.m. (02) 515-5114, www.bojagii.com
Club Circle
This club is just 3 months old, but it has become the most popular in well-heeled Gangnam. The place is famous for its exterior, which is entirely covered with light emitting diodes, its interior hologram lasers and soundproofed VIP rooms. This luxurious club is very exclusive. There is a dress code. No baseball caps or hip hop pants are allowed. It’s open from 7 p.m. to 7 a.m. Admission is 20,000 won weekdays and 30,000 won at the weekend. A reservation is necessary for a private room or a sofa bed. (02)546-5933, www.thecircle.co.kr

A private theater, great bargains and some hip-hop music
Baekmanbul (No. 16 store)
Baekmanbul, meaning $1 million, is the biggest shop in Itaewon market, the heart of Itaewon fashion. The clothes are similar to trendy clothes sold by luxury brands. Unique dresses are a speciality. A blouse costs 50,000 won, dresses are 70,000 won and a trench coat is 100,000 won. Near Noksapyeong station, line No.6, exit 3, open from 11 a.m. to 8 p.m. The market is closed on the second and fourth Tuesdays of each month. (02)749-4971
VIP Theater in the Lotte Cinema at the Avenuel department store
President Roh Moo-hyun and his assistants watched a movie here on New Year’s Day. The theater has only 34 seats. Moviegoers can drink beer or coffee in the lounge before the movie starts or order a meal or a glass of wine while watching the film. Reservation is necessary by phone or via Internet. Tickets are 25,000 won to 30,000 won. The entire theater can be rented for 720,000 won on weekdays or 900,000 won at the weekend.
B Show
“B Show,” performed at Ziller Zone, is a work by B-boy break dancers. This is the new piece by Lee Keun-hee, one of the art directors of “A Ballerina Who Loves a B-boy.” Breakdancing and rap music constantly fill the hall. Shows are 8 p.m. Tuesday to Friday, 4 and 8 p.m. on Saturday, and 3 and 7 p.m. on Sunday. Tickets are 50,000 won. (02) 741-9700, www.bshow.co.kr
Club M2
Club M2 is the biggest club in the Hongik University area. Twelve hundred people can dance in the club at the same time. The club has two floors and patrons dance throughout the night. It’s open from 8 p.m. to 4:30 a.m. Sunday to Thursday, and 7:30 p.m. to 6 a.m. on Friday and Saturday. Admission is 10,000 won during the week and 15,000 won at weekends. (02) 3143-7573, www.clubm2.com 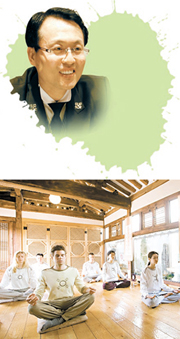 Meditation with tea, a hanok guesthouse and a male hideout
Arui
The morning at Arui in Insa-dong begins with meditation. Ten foreigners sitting cross-legged on the floor fall into what seems like an eternal silence. Arui is one of 50 meditation cafes in Korea, run by Soosunjae. There are also 10 such medication cafes outside Korea. Arui has a cafe and a meditation room. People usually come here because of the hanok, or traditional Korean home, in whichArui is located, but they become fascinated by meditation.
“Meditation is emptying out one’s mind and discovering oneself,” said Jin Ja-yeon, who organizes the meditation. Visitors also get a chance to draw pictures to reveal what is hidden in their minds.
A monthly regular meditation course costs 100,000 won, while a two-hour course is 20,000 won. Most regular members are foreigners. There are two regular sessions for foreigners, organized by Roy Sheppard. Teas brewed with mushroom and four different herbs are priced at 6,000 won or 8,000 won. (02) 722-6653, www.arui.org
Rakkojae
Rakkojae is a guesthouse in a hanok, where visitors can taste the atmosphere of a traditional Korean home. There are four small, elegant buildings with six guest rooms. The view of the garden from a narrow porch in the main building is amazing. Old pine trees form an arbor, and Japanese apricot tree flowers create picturesque scenery. The guesthouse was built by Jeong Young-jin, who is registered as an intangible culture asset. The rate is 180,000 won per room. A traditional Korean course meal costs 50,000 won. (02) 742-3410, www.rkj.co.kr
Dahwayeol
Dahwayeol is a luxury spa for men in Gangnam district, occupying a three-story building. There is an outdoor spa and a sauna heated by burning pine wood. There are massage rooms and a wine bar in the club lounge on the first floor. There are three business rooms with Internet connections. The massage is said to relieve stress and improve stamina. Admission is 17,000 won during the day and 21,000 won at night. The 90-minute relax massage costs 100,000 won and the two-hour therapy massage is 149,000 won. (02) 6255-0307, www.saunaman.co.kr.
Food vendors at Gwangjang market
This neighborhood has a number of restaurants that are more than 40 years old. The path along the Cheonggyecheon stream leads to the market. There are as many types of foods as there are vendors, including traditional blood sausage, pancake and noodle.
The Saebyeok bridge connects Bangsan and Gwangjang market. Stairs near the bridge lead to the foods neighborhood. Vendors sell a plate of pancakes for 4,000 won, and a serving of blood sausage is 5,000 won. Jongno 5-ga station, line No. 1, exit 7

Busan delights with boats, bridges and a walk along cliffs
Tiffany 21 cruise
The Gwangan bridge in Busan has extraordinary illuminations at night. The lights on the 7.4-kilometer (4.6 mile) long bridge go on and off in a sequence that creates the image of a seagull in fight. Tiffany 21 is the most famous cruise tour in Busan and offers a chance to see the bridge from the sea. The ship departs from a pier near Dongbaek Island and cruises around the bridge. The dinner tour (70,000 won per person) starts at 7 p.m. and the night tour begins at 10:30 p.m. 1577-7721, www.coveacruise.com.
Beacon tower on Mount Hwangryeong
For a view of Busan there is no better place than the beacon tower on Mount Hwangryeong. Visitors can enjoy a panoramic view of Haeundae Beach to the east and Busan harbor and Yeongdo to the south. The tower can be reached from Busan KBS in Namcheon-dong, Suyeong district. (051) 607-4531
Igidae natural park
This famous park offers an opportunity to enjoy the mountains and the sea. The park’s beachside path is very popular. Walking the path from Eoul Madang along the slopes Mount Jangja leads to some plunging cliffs. (051) 607-4541