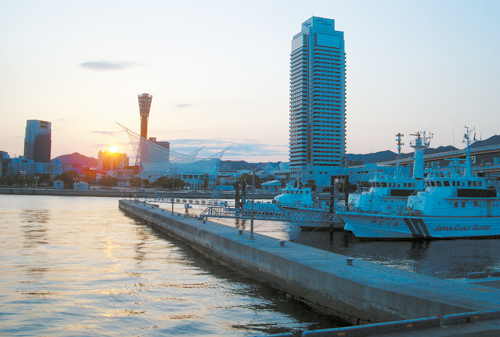 A serene evening scene at the Port of Kobe displays the peaceful nature of the city, and belies the massive amounts of trade and industry that pass through the port every year. By Richard Scott-Ashe

My first opportunity to travel to Japan (a few brief and unimpressive stopovers in Tokyo’s Narita Airport notwithstanding) came up suddenly, and I did not have time to prepare. I had no hotel reservation, no real itinerary, and my knowledge of the port of Kobe was limited to the two most obvious bits of trivia ― that it is the home of the appropriately named Kobe beef, and that it had been dramatically crushed by the Kobe Earthquake.
But Japan is prepared for even the most hapless traveler. Coming through Kansai Airport in Osaka, a series of immaculately dressed airport information officers directed me onto the bus to Kobe. Two preened luggage handlers filed my bag away, glancing at their wristwatches every few seconds, lest the bus leave a second too late. As the bus pulled away into the Osaka night, they lined up at the edge of the sidewalk and deeply bowed until we had rounded the corner.
As I learned later, the 7.3 magnitude Great Hanshin Earthquake struck Kobe as the Philippines Plate slipped under the Eurasian Plate on January 17, 1995 at 5:46 a.m. Killing over 6,000 people and leaving another 300,000 homeless, the tremor also caused over $2 billion in damage to the city, making it, according to the Guinness Book of World Records, the “costliest natural disaster to befall any one country.”

From top to bottom: A plaque in Kitano-cho Plaza declaring a friendship with Montmartre in Paris; England House; a quiet Kitano street; and the view down Flower Road, near Sannomiya Station. By Richard Scott-Ashe