A profusion of godly teardrops

A profusion of godly teardrops 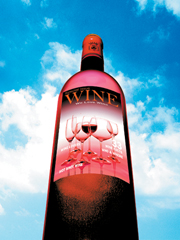 Now that warmer weather has arrived, it isn’t difficult to find cafes with outdoor tables, where men and women can spend a lazy afternoon with a glass of wine and some pretzels or cheese. Seeing these scenes, and thinking back 10 years ago, one can’t help wonder how and when wine became so popular in Korea.
It was just over a decade ago that orangejok (a term for Koreans who studied abroad) began to dominate Cheongdam-dong culture, and anything foreign they brought home with them, whether it was Guess jeans, Ralph Lauren blouses or French wine, was looked upon with distaste and envy by those who were not members of their clique.
In 2007, wine is no longer a status symbol per se. It has evolved to become a friendly drink which is enjoyed with bulgogi (seasoned beef) as often as it is sipped with a high-priced steak.
But has Korea truly developed into a sophisticated wine market?
According to a report by the Korea Agro-Fisheries Trade Corporation, wine imports in 2005 reached 18,984 tons, valued at $67,655,000. Last year Korea imported 22,195 tons with a cost of $88,607,000, increases of 17 and 31 percent respectively. In short, Korea is importing more wine and the products purchased are becoming more expensive.
“During the last three to four years, higher priced wines have become best sellers,” said Lee Chul-hyeong, CEO of Winenara, one of the biggest wine distribution companies in Korea. 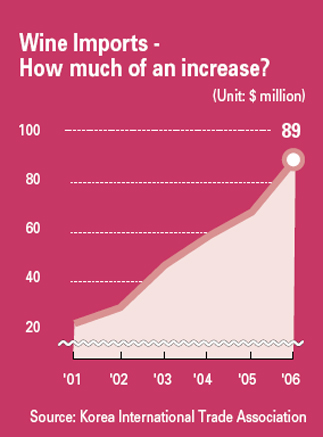 Lee explained that, in 2004, the top 10 wines sold through Winenara were all in the 10,000 won ($10.70) range but that, in 2006, the cheapest wine on the company’s top 10 list was priced at 25,000 won. “Plus, Don Perignon, the premium champagne, was at number five, which means that with basic red and white wines, Koreans are drinking a greater variety.” He added that sparkling wine is also selling well.
“There has been a polarization in the market with one group tending to buy high-priced wine and another consuming cheaper products,” said Kim Hae-ju, a director at Double U, a wine marketing company. “This helped to broaden the choice of wine available to Korean consumers. I feel that this will lead to a more individualized, personal approach toward wine in the future,” she said.
Many wine experts say this is a natural evolution toward a steady and mature wine market, while others say that it reflects conspicuous consumption by Korea’s upper class. 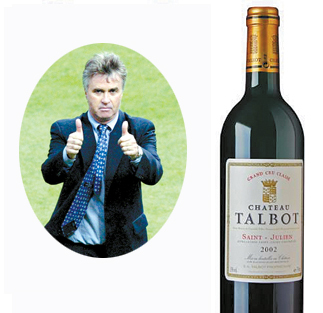 One influential figure in the high-priced wine market is Lee Kun-hee, chairman of the Samsung Group. Lee served up 1982 Chateau Latour, which costs between 2 to 3 million won in a bottle luxury hotels, to company heads during a large-scale meeting in January. Since then, the popularity and price of this already expensive wine has risen sharply.
Another figure to increase demand was Gus Hiddink, the Dutch soccer coach, who led Korea to the semi-finals of the 2002 World Cup. During public appearances Hiddink often said that he enjoys wine and that, in particular, he likes to relax with a glass of Chateau Talbot, an expensive wine from Bordeaux that subsequently become popular.
The Japanese cartoon “Teardrops of God” by Tadashi Agi also played a big role. This cartoon series, in which the plot revolves around wine, was embraced by the Korean public.
“The cartoon, along with ‘Master of Taste, [another Japanese series centered around food] sparked an interest in diverse food cultures,” said Lee. 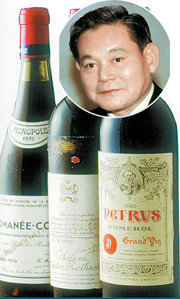 “It is true that, compared to countries like France and Italy, where wine and culture have been synonymous for millennia, Korea’s wine consumption is still excessively influenced by trends and celebrities rather than a natural love of wine itself,” said Hong Jung-hwa, the director of the Food and Beverage team at the Shilla Hotel. She added that increased incomes and wine’s oft-touted health benefits will increase the popularity of higher-priced wines.
There are also voices of concern. This month, while on a visit to Korea, Franck Duboeuf, the president of French winery Georges Duboeuf, said that wine is too expensive here and stressed the need for wine prices to fall and a culture in which lower and higher priced wines can coexist.
There is also the added difficulty of import taxes. When a bottle of wine is imported to Korea, the shipping costs, insurance, customs fees and a liquor tax is added. The result is that a 10,000 won bottle of wine can triple in price.
In Japan, liquor taxes are levied by quantity, not price. In Korea liquor taxes are set according to the original price. As the wine gets pricier, the taxes become steeper.
Along with the growing popularity of expensive wine, there is also a move to popularize low-to mid-priced wines.
In places like Hongdae, the are around Hongik University, or Apgujung-dong, there are wine pocha (street vendor) streets in which casual wine bars sit next to each other.
They have humble interior decorations and inexpensive side dishes such as cheese tteokbokggi (a Korean red pepper rice cake dish). In front of Hongik University, these wine pochas are lined up in a row and include Elmo, Shy Cat and Free Heart. They mostly cater to university students and wine novices.
The price of wines in these bars is much lower than elsewhere, mostly ranging from 10,000 won to 30,000 won. The customers can access good quality wine at store-bought prices.
The Olive Tree is a popular wine pocha near Seoul National University of Education. Jjappageti, a kind of ramen found in grocery stores, is served at 3,000 won per person.
When entering the tiny, unpretentious bar, the owner, Lee Dong-su greets his customers with boiled eggs and a simple menu with specific explanations about each wine’s origin and taste.

Wines here are mostly from Chile, the United States and Australia. “In wine pochas, French wines are not too popular,” he said. After the free trade agreement between Chile and Korea three years ago, the demand for Chilean wine grew and Chile is now the second biggest exporter of wine to Korea, after France.
“In casual wine bars for younger customers, wines from countries like Chile, Australia, the United States, Spain and Argentina are very popular. They have the same quality as many wines from France or Italy but they are much less expensive,” said Lee Dong-su.
With the conquering march of wines from the countries listed above, classics, such as Bordeaux, have been forced to raise their game.
In March, the CIVB, the Bordeaux wine council, and Sopexa, the marketing and promotion board for French food and beverages, held a promotional event at which 100 affordable Bordeaux wines were featured, all ranging in price from 10,000 to 40,000 won. Christian Delpeuch, the head of CIVB said that with new wine-producing countries appearing on the map, the competition is getting stiffer but he hopes that people will still pay attention to the history and quality of Bordeaux wines.
“It’s a transitional period for Korea,” said Lee Chul-hyeong. “Although there are still many areas to improve upon, the main thing is that the public is excited about wine. Before ‘Teardrops of God’ came out, only a few people considered Pinot Noir as a viable choice because most were familiar with stronger flavors, like Cabernet Sauvignon,” he said.
“Ever since 2003 when this wine boom was at its peak, people are not only interested in wine, but also the food combinations, history and cultural context that goes along with wine,” said Hong. “This kind of interest in the cultural context of wine, more than anything else, will be a plus for Korea’s wine industry,” she said.