Putting a face on fantasies of evil, death and fortune

Putting a face on fantasies of evil, death and fortune 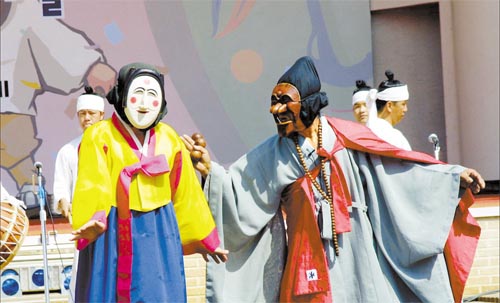 16th in the series | Masks
In Itaewon and Insa-dong, antique stores display rows of wooden masks, attracting steady streams of tourists fascinated by their shapes and colors.
In the past, Korean masks played an intricate and important role in Korean society, especially in the rituals that were once used to protect against evil spirits. Today, the masks are most commonly used for performances at folk museums or as wall decorations.
Sim Woo sung, head of the Kongju Folk Drama Museum, in his book on Korean masks, says that they can be divided according to two purposes; religion and entertainment.
Religious masks can be subdivided further into divine masks, which are not worn but are placed in specific locations during the sinseong mask ritual, and masks that were worn in the hope of chasing away evil spirits, called guna masks.
Experts say that, in the past, people performed shamanist rituals and believed that by wearing masks spirits would descend upon them. By wearing masks with grotesque expressions they thought they could scare away evil spirits.
The oldest mask ever found in Korea, the moksimchilmyeon, was discovered in Gyeongju, North Gyeongsang province, in 1946, and is presumed to have been made during the Shilla kingdom in the 6th century. Historians believe it was used at funerals to protect the dead from evil spirits.
However, most of the masks in existence today were created with entertainment in mind.
In his book on Korean mask performances, Chae Hee-wan, a professor at Busan National University, observed that the art form was an attempt to solve conflicts between humans and divine beings as well as easing enmity by attacking negative aspects of human society. Chae said many of the performances were highly theatrical and mocked the existing social order.
Sim, in his book, divides the entertainment mask into two separate categories: dance and theatrical performances.
The distinctive feature of Korean masks is that most have a comical expression with lots of broad smiles and surprised looks. Another interesting feature is that most of the masks depicting aristocrats have grotesquely distorted faces. The nose and mouth are twisted and the eyes are centered toward the nose. These masks, most of which were made during the Joseon Dynasty, reflected the general public’s hatred towards aristocrats.
Since masks were used during rituals and performances in which there was a lot of movement, they were designed so that performers could move with ease.
The most widely known and commonly seen mask is the hahoe, which was designated as a national treasure in March 1964. There are 11 types of hahoe masks used in a standard performances. They represent head Buddhist monks, ordinary monks, an aristocrat, a bride, a scholar , an immature person, a scholar’s servant, a young woman whom the aristocrat and the scholar fight over to win her love, a butcher and an old lady.

Above: Examples of hahoe masks showing an aristocrat, top, and a young woman. [JoongAng Ilbo]

It is unclear who invented these masks. However, it is presumed that they were originally created somewhere between the 11th and 12th century of the Goryeo Dynasty. According to legend, the person who made the masks was called Huh. One night, in a dream, he was commanded to make the masks by a divine spirit.
The next day, Huh set up a divine boundary around his workshop with a special rope, in order to prevent the presence of any impurities. He then cleansed his body before he began carving. However, a woman who was infatuated with Huh went to his workshop and stole a glance at the mask maker. At that moment, Huh coughed up blood and died on the spot. Hence the mask representing the scholar’s servant was incomplete. It is the only mask in the hahoe series that has no jaw.
What makes hahoe masks interesting is that the jaws of the aristocrat, the monk, the scholar and the butcher move, giving them a more realistic expression. Additionally, the immature person and the servants masks are asymmetrical and therefore their expressions change depending upon the angle they are viewed from.
The byeongsan mask is another well known example. Currently only two original examples exist. One is presumed to depict an aristocrat and the other a scholar. Neither mask covers the jaw, an unusual feature among Korean masks.
Another interesting feature is that the aristocrat mask has double eyelids and there are signs that it had implanted nose hairs.
Like hahoe masks, it is not clear who originated these masks. However, they are believed to have been developed during the Goryeo dynasty.

Bangsangsi masks were used during funerals. Although the moksimchilmyeon, has two eyes, the distinctive feature of bangsangsi masks is that they have four eyes. The forehead, eyebrows, nose and ears are made separately and attached to the main frame. There are no holes drilled in the eyes or the mouth.
The masks were made out of wood, paper or straw. The materials differed depending upon the person’s social status. Straw masks were used by the lowest classes. The person wearing the mask leads the funeral march while riding on a cart. At the burial site the mask chases away evil spirits. The mask are then either buried near the tomb or incinerated. New masks were made for every funeral.
There are a few historical indications that suggest how masks developed and became important in everyday life. Examples of Korean mask performances during the Goguryeo kingdom (668-37 B.C.) can be found on a wall of the Dongsoo tomb. The drawings on the tomb depict a dance and it is generally accepted by scholars that the dancers are wearing masks.
Most of the masks that survive from the Baekjae kingdom, which began in A.D.18, are currently in Japan. Some 200 masks that were made between the 7th and 8th century are currently preserved there. Experts say the mask culture of the Baekjae was exported to Japan during these periods.
The art of the Shilla Kingdom was heavily influenced by China. One of the performances that demonstrate this theory is the sword dance, that had a strong Buddhist message and incorporated a masked performance.
The only part of the dance that does not use masks is the portion with Buddhist messages.
It is believed that the sword dance involved masks, and was more like a theatrical act than a religious ritual, even though its function was to chase away evil spirits and encourage beneficial deities. There are other masked performances that tell stories that are important to Korean religious beliefs.
The Goryeo Dynasty created a new culture that was heavily influenced by Buddhism.
The simple ritual act of chasing away evil spirits took the form of performances involving masked clowns.
During the Joseon dynasty, Korea adopted Confucianism and distanced itself from Buddhist beliefs. Yet, although masks had less religious significance during the Joseon Dynasty, there were many seasonal celebrations in which masks were used, including the lotus lantern festival.
The main difference with these festivals was that the religious aspect had been weakened. Theatrical masks for the purpose of political and social satire increased in number during this period.