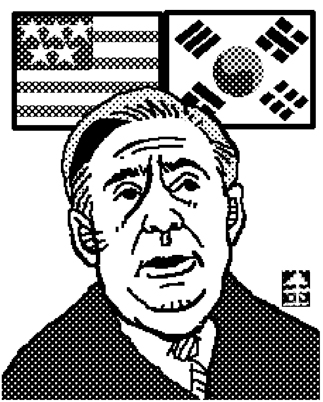 The fact that former President Park Chung Hee planned to develop nuclear weapons during the 1970s is no longer a secret. A document (Feb. 28, 1975) revealed by the National Security Council of the White House states, “The Korean government has entered the initial stage of developing nuclear weapons.” Later, Park called in Korean-American scientists and engineers and tried to develop nuclear weapons individually but failed.
This is the juncture at which a CIA agent who was working for the U.S. Embassy in Seoul was able to distinguish himself. A cub agent revealed the nuclear development plan just three months after the investigation started. He was able to obtain a secret document from a person directly related to nuclear development. Later, Donald Rumsfeld, then secretary of defense for the Ford administration, came to Korea and said, “If Korea does not abandon the idea of developing nuclear weapons, we will re-examine the whole relationship with Korea.”
The cub agent later became the CIA expert on Korea ― Richard P. Lawless. Lawless is the current deputy undersecretary of defense for Asian and Pacific affairs. He worked for the CIA from 1972 to 1987 and was a member of the NSC during the Reagan administration. His major fields are satellite and nuclear energy, which are sensitive and high- technology military issues. His longest overseas assignments were in Seoul and Tokyo. Comments were made that “he has acquired many Korean connections,” and his ex-wife is a Korean woman.
Lawless re-entered the stage in 2002. This time it was in an overt position. He became the deputy assistant secretary of defense under Rumsfeld and took charge of ROK-U.S. and ROK-Japan military issues.
He presented unexpected propositions during the negotiations on wartime operational control and returning the Yongsan base. He was a tough negotiator ― sometimes being repressive, sometimes threatening. His comments were criticized as intervening in domestic affairs. He was also “notorious” in Japan, where he negotiated on behalf of the U.S. army base.
According to the press, Lawless is resigning in July due to health conditions.
He was a very Korean person who drank poktanju, mixed beer and whisky, or soju, with the Korean negotiating team after the meeting was over. However, after negotiating strongly on America’s behalf, some question whether he was truly a pro-Korean person. In any case, for the U.S. side, he was a very talented agent and negotiator.