Fighting for a feminist perspective on the silver screen

Fighting for a feminist perspective on the silver screen 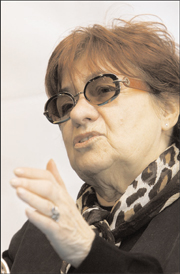 When Hungarian film director Marta Meszaros addressed the press at Sinchon’s Artreon theater, her audience was so quiet one could have heard a feather drop. Reporters sat bewitched, like children at the feet of a revered grandmother, as Meszaros shared stories from her illustrious career.
“When I started studying film, no one had imagined that a woman could enroll at a film school to study directing,” Meszaros said. “And when I introduced myself as a director at the Berlin [Film Festival], people scoffed, asking how a woman could possibly make a film. Some even said that a woman could make a film, but it would never be a good one.”
Now, at age 76, Meszaros is established as one of the most important directors to emerge from Eastern Europe. Since the 1960s, she has made films about gender bias and state oppression and she has won prizes at the Berlin, Cannes and Venice film festivals.
The director came to Korea last week to participate in this year’s Seoul Women’s Film Festival, which ends today.
“Korea is very far away from Hungary, and seeing that God has allowed me to travel all the way here safely, I have the feeling that he will let me continue with my work at my advanced age,” she said, through an interpreter.
Meszaros is a brave and ambitious woman, who spent part of her lecture talking about what she sees as the absurdity of modern times. She said she felt the film industry has “serious problems” because filmmakers have to focus on making highly profitable films.
She was particularly concerned about the commercialization of the industry, which she thinks has forced young directors to make films according to the views of investors.
“If censorship in the past occurred for political and ideological reasons, censorship in modern times occurs because of how much or how little capital a project has,” she said, adding that there are many young Hungarian directors who have difficulty producing films at present, because of a financial drought in the country’s film industry.
“I hate the large-scale American film industry,” she said. “But I do personally like American films that are made by ‘cineastes,’ because these are films that I view as real movies.”
Hungary was a socialist country. However, Meszaros said that growing up and working there wasn’t as bad as in other neighboring countries, where censorship was much tighter. She said directors were allowed to travel to other nations, if their films were entered in an international film festival. She even managed to confront issues facing the Soviet Union in her films, depicting it as a backward country.
Her acclaimed semi-autobiographical “Diary” series, shown this week, features her idealist father and the way he is swept up by Soviet propaganda about a socialist Eden. It demonstrates the skill with which she tackled ideological issues. In the film, the characters find only totalitarian oppression in the “paradise” the government had promised.
“I have made many different kinds of films about the lives and thoughts around us,” she said. “I don’t think it is important at all to categorize a film as a female film just as you would not differentiate a film by calling it a male film.”
However, her female perspective caused considerable controversy in 1976, when she made “Nine Months,” a documentary that followed an actress from the moment she discovers she is pregnant until she gives birth. It was the first time an actual birth scene was shown on the big screen.
“Many men could not conceal how disgusted they were with the idea,” she said, chuckling. “They seem to be very comfortable with films about violence and death, but they reacted as if it were beyond their capacity to watch a woman give birth.”