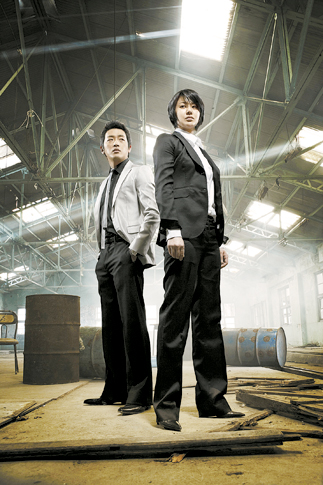 Hit American television dramas are now being challenged by their Korean counterparts. Recently, a string of Korean dramas that include characters like federal investigators, police chiefs and emergency room doctors are appearing one by one. The dramas, being compared to the American dramas they modeled their plots around, are stirring up controversy and generating both negative and positive feedback.
On the one hand, some viewers say that these dramas present a fresh and innovative format.
Others however, are criticizing the producers saying they are ripping off ideas and that these dramas lack quality. The producers defend themselves by saying that as Hollywood has been making dramas for decades, the subject matter and formats are bound to overlap with Korean dramas. They also said that the important thing to look for in these dramas is how they adapt American elements to fit Korea.

Korean Network Television vs. American Dramas
The MBC drama “H.I.T (Homicide Investigation Team)” has been compared to the American drama “CSI (Crime Scene Investigation)” from the get go. At present, the drama is holding steady with a 16 to 18 percent viewership.
Since the long-running show, “Susabanjang,” centering around a police station, went off the air in 1989, there hasn’t been a hit crime drama on Korean television.
“H.I.T” stars actress Go Hyeon-jung as a female section chief. Compared to past dramas that focus on marriage and family life, “H.I.T” tells a different kind of story. Since it first aired on March 19, viewers have been divided in their opinions. For CSI fans, the drama was a disappointment, but for others, “H.I.T” was a new kind of drama that hasn’t appeared on Korean television for years.
Responding to the criticism, the show’s producers said that they were not looking to make a Korean “CSI.” Kim Yeong-hyeon, who writes for “H.I.T,” said during a press conference promoting the drama that the production “concentrated on making a ‘Korean’ crime drama ― something that stays true to this particular culture.”
“Air City,” a drama that is currently in filming, is being compared to the American drama “LAX.” With the Incheon International Airport as its background, “Air City” is set to air next month, following “Que Sera Sera.” Actress Choi Ji-woo plays a department chief at the airport, and actor Lee Jung-jae plays a federal agent.

“LAX,” actress, Sarah Jessica Parker in a similar pose for the HBO series “Sex and the City” and Choi Jeong-yoon posing on the poster for the cable drama “Romance Hunter” [JoongAng Ilbo]

Although there have been Korean dramas in the past that featured flight attendants and pilots, there has never been one that uses the politics of various airport departments as its focal point.
“LAX” on the other hand, which aired in 2004 on NBC, was shown on the Korean cable network XTM. The setting is the Los Angeles airport, and its plot deals with the security, illegal immigrants, lost children and drug problems that arise in airports.
Although the two dramas feature different roles for their leads, they both explore the lives of various minorities and security issues.
Korean Cable Television vs. American Dramas
Similar dramas can also be found on cable television. “Romance Hunter,” which aired in early February, stars actress Choi Jeong-yoon as a relationship consultant and follows four of her female friends and their quest to find love. The drama has been compared to the hit HBO drama “Sex and the City” as the female characters are all city-bound, professional women.
“Sex and the City” follows sex columnist Carrie’s (Sarah Jessica Parker) narration of her life and the lives of her three friends in New York City. The network, tvN, made a poster with Choi posing in the exact same way that Carrie did in “Sex and the City,” and like the American drama, it made promotional posters that were actually featured on 18 Seoul city buses.
The On Media drama “Police Line” is compared to two American dramas ― “Law and Order Special Victims Unit” and “The Inside.” “Police Line,” like “The Inside,” features a female police officer character who has been sexually abused. And similar to “Law and Order SVU,” the plot is set in a special victims unit for the sexually abused. The lead went to actress Ha Ri-su, and Jung Tae-woo stars as a fellow police officer. The producers said that although the subject matter has similarities to the American dramas mentioned, the way the plot unfolds will be very different. Jang Ji-wok, the director of Infinity Entertainment, which produced “Police Line,” said: “We weren’t trying to compete in scale with American dramas but tried to make a unique show that fit Korean cable television. I think ‘Police Line’ will be an entertaining drama that might rival the American dramas people compare it to.”