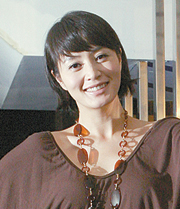 Actress Kim Hye-soo has been invited to be the guest “diva” at the Udine Far East Film Festival opening Friday in northern Italy. She will meet with the local press there, as well as participate in a panel discussion on Korean film.
“I am very honored and delighted to be invited to the festival,” said Kim through her management agency. “I believe it [my invitation] was possible because the stature of Korean films has grown significantly over the past year in the international film industry.”
The organizer of the Italian film fest is also reported to have praised Kim, saying that she “is a good representative of Asian actresses” and that “her participation will bring her more to the attention of the European press.”
Out of the recent films she starred in, “Tazza: The High Rollers,” formerly known as “The War of Flowers,” has been chosen to screen in the festival’s special feature category, while “A Day for an Affair” has been chosen to show on the closing night.
The opening night of the 9th Udine Far East Film Festival is April 20, and the festival will continue until April 28. A total of 14 Korean films have been invited, including “200-pound Beauty,” “The Host” and “A Dirty Carnival.”