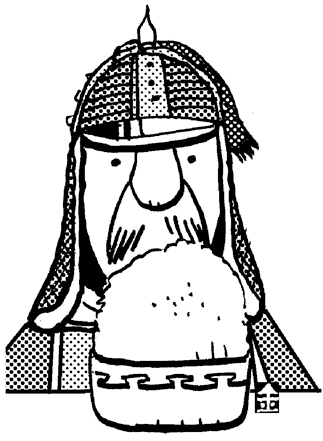 This is about the aging of one of the bravest and most honored generals in the Cho dynasty during the Warring States Period. Yompa, the general, left for Yui, a neighboring country, because his country no longer wants an aged general. Nevertheless, the faithful old veteran pined for a call from his homeland, dreaming of one more opportunity to serve Cho.
An envoy of Cho finally called on the general, who had been longing for such a visit. The dynasty sent a mission to the once dreaded general to test whether he was still capable of conducting war despite his old age, because Jin, another neighboring country, had constantly encroached on Cho’s borders. The Jin dynasty was alarmed that the general might be employed again, though a bit old. Hence, Jin bribed the envoy from Cho so that the man would not accurately report the old general’s capacities.
The general intentionally ate loads of food when he dined with the envoy; having gorged himself on a basketful of rice and ten times more meat, he mounted a horse while wearing full armor. This was all to show the envoy that he still had vigor.
But the bribed envoy made an adverse report. He said the general was so old that he had to excuse himself to go to the toilet three times during the meal, although he consumed an impressive amount of food. The Cho dynasty did not hire the general again.
This story is called “Yompa’s great appetite,” and comes from Records of the Great Historian, of which some parts are dedicated to the biographies of important figures. The story refers, on the one hand, to an old man putting forth a sacrificial effort for a state, but on the other hand, it is about anachronistic efforts to apply an old, unfit item to a new, changed situation.
Recently some politicians have asked their seniors to return to office. They are serious, not just paying lip service. The competition is getting intense to have retired politicians on their side. Presidential candidates from the Grand National Party are showing an excessive zeal to attract former President Kim Young-sam and other popular senior politicians. Former President Kim Dae-jung can no longer be adored as he allowed his son to run for a by-election in his previous constituency.
But doubts exist whether these former politicians are as needed as Yompa was. If the old politicians are thought of highly because of their excellent capacity to instigate hostility between different provinces and to plot corruption, this type of statesmanship is on the retreat. New politics should be filled with new faces and new ideas.