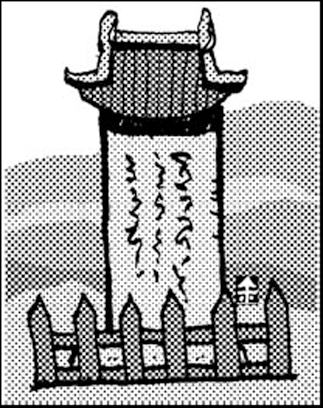 During the latter part of the Ming dynasty, hoodlum and gambler Wei Zhongxian was a notorious eunuch who rose to great power by working in cahoots with a wet-nurse to manipulate the Tianqi Emperor. He gained absolute power over the secret police and began a reign of terror.
Impulsive and uneducated, he astonishingly placed himself on the level of the sages, equating himself with Confucius and coercing people to worship him. Wei enshrined god-like statues of himself decorated with gold and would execute anybody who did not bow to them. During the memorial rites held for Confucius during the spring and fall, even the emperor himself would kneel and bow to Wei’s enshrined statue. Abundant in power, he was bent on being acclaimed by the world and by history, but in the end, all this was useless. As soon as the next emperor, Emperor Chongzhen, ascended to the throne, Wei hanged himself to escape trial.
Our country is chock-full of monuments eulogizing virtuous deeds. Of course, some monuments eulogize great achievements and embody the true heart of the people; however, some malevolent officials gathered money upon being appointed and forced the erection of monuments. The magistrate of Gobu county, Jo Byeong-gab, forced peasants to erect a monument honoring his father. People who passed by this tombstone would spit, throw stones and curse at it. The game of “stoning the monument” started from here.
While enjoying the greatest power on earth, there is a tendency to desire to extend one’s reach beyond the grave. As soon as Chinese emperors were crowned, the first thing they did was to prepare a royal tomb. They placed treasures in their tombs, and buried their concubines alive; however, before the ground dried, it was common for grave robbers to plunder their tombs.
President Roh Moo-hyun’s memorial will be built at Inje University, which is located in the president’s hometown, Gimhae. Good or bad, records must be kept. After all, our dynastic record -- the Annals of the Joseon Dynasty -- was the longest-kept record in the world. It is abominable that he is so concerned with his memorial while still in office, but opposing it seems narrow-minded, as well. What if we took this opportunity to erect memorials for all our former presidents?
One should only go so far to leave a historical record, but concocting how one will be judged by history is no different than creating an enshrined statue. Parading close aides in a forum that will one-sidedly appraise the achievements of the administration is a sure ticket to having people throw stones.