The limits of entertainment

The limits of entertainment 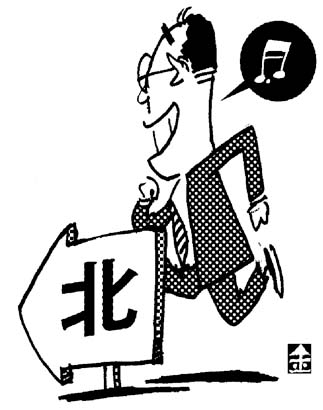 A Korean TV commercial encourages viewers to “put on your own show,” an invitation to demonstrate your talents and wit without hesitation. Koreans used to hesitate to stand out in public but now they are changing. Even a commercial says that you should be able to show what you are made of.
Chinese people quite often use a similar expression. When politicians do something out of political calculation but pretend to be unaware of it, Chinese people ridicule them and say, “They are putting on a show.” These days, people use the expression “to put on a show” in this way, but in the old days it meant to have fun.
There is an old anecdote. During the Tang dynasty, a Buddhist master named Majo had a conversation with his pupil, who was en route to challenge another famous master. Majo asked the pupil, “Where are you going?” “I’m going to challenge the master, Stonehead,” the pupil answered. “He is not an easy match. How are you going to handle him?”
The pupil answered, “I will carry a baton with me so we can just have great fun. Don’t you think that’s a good idea?”
The dialogue conveys layers of connotation, so it is not easy to understand it fully. But the story seems to be about the bravery of the young monk who believed that as long as a person is awakened to the truth, it doesn’t matter much whether he is skilled or not. Entertainers and acrobats who traveled around and put on shows on the street might have quoted the story often.
South Korean politicians seem to have made up their minds to put on a show in North Korea. Major figures in the ruling circle visit North Korea and stage a variety of events. Criticism erupts over their intentions. People point out that they should not do so only to gain popularity for the upcoming presidential election.
It is dangerous to feel blind brotherhood when we deal with North Korean officials because they are a people of similar ethnicity. They only think about strategies and tactics when it comes to South Korea issues. We need to see them in light of the bigger strategic picture. If politicians who enjoy putting on shows take North Korean issues as their subjects, the basis of our North Korea policy could be shaken. If politicians have impure intentions, they might as well stop their North Korea shows.
By the way, the pupil who was ambitious enough to challenge the master Stonehead was defeated mercilessly. He was armed with showmanship but could not overcome the great Zen master of his era. Shows are nothing more than shows, after all.