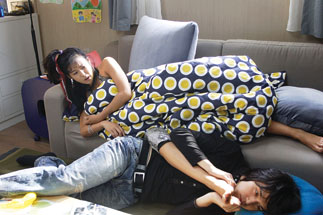 Having to sit through two hours of “The Perfect Couple” is a vivid reminder that a job as a movie reviewer is not always fun, and in fact, can test one’s patience. This reviewer even felt proud for not giving up on watching the film halfway through its cruel 109-minute running time. No wonder critics for a movie magazine overwhelmingly gave the film a thumbs down when it debuted in theaters earlier this year. Plus, it flopped at the box office ― proof there is a God.
So here is a review meant to save our dear readers from accidentally picking up this film, recently released as a DVD, at a neighborhood rental shop.
This self-described romantic comedy tells the story of the love between Choi Soo-jin (Hyun Young), a newspaper reporter, and Kang Jae-hyuk (Lee Dong-wook), a detective. Soo-jin joined journalism full of dreams but without the capacity to change the world, and she is not happy hounding TV celebrities.
Complaining about her life on the street one day, she has a disastrous first encounter with Jae-hyuk, who was chasing after a runaway suspect. Soo-jin happened to be eating a fishcake served on a wooden skewer with pointed tip, and the skewer happened to stab Jae-hyuk’s belly, and he fell ill.
(I thought about asking the National Institute of Scientific Investigation if this scenario were even possible, but gave up on the idea because this film does not deserve such an investment of time and effort.)
After this peculiar encounter, Soo-jin and Jae-hyuk find themselves fighting like cats and dogs. Yet, they continue their relationship as Soo-jin is told to work on a story about a detective, who happens to be Jae-hyuk. From then on, Soo-jin joins Jae-hyuk’s crackdown on drug dealers, and they start to fall in love with each other after several ups and downs. The director dragged this out for for more than an hour, but to describe the details of this meaningless sequence would be to run the danger of putting our dear readers to sleep.
Another of this film’s turnoffs, especially for real-world female reporters, is that there is not even one scene where Soo-jin wrestles with a computer to write a story. All she does is drink, puke and sing karaoke like crazy. This defames real reporters, who spend a considerable amount of time staring at a computer monitor with their fingers poised above the keyboard.
Furthermore, the film continuously ridicules Soo-jin’s reporting ability, including a scene about a police officer telling her that she is “pretty for a female reporter.” Soo-jin also just smiles away a sexual-harassment incident when a pop singer she interviews fondles her breasts.
Another defamation is a scene where Soo-jin’s senior reporter tells her to “just sleep with the president of the company” to move to a department she wants. That senior reporter is described as one problematic character. She goes on to grab the buttocks of a rookie male reporter, another incident of sexual harassment, when the rookie is not even cute.
Naturally, this film begs for someone to file a defamation suit for disparaging the honor of female reporters. Or, perhaps female reporters of this country should form an association and issue a edict for the director and scriptwriter to change their ways.
One of the very few elements of this DVD that did not get on this reviewer’s nerves were its passable English subtitles. Special features are the conventional materials for a DVD release, such as audio commentary and a compilation of deleted scenes. English subtitles often had errors that changed “without” to “with out.” However, even a fair translation of the film does not save it from its own idiocy.