No embroidery, some steel and lots of wood

No embroidery, some steel and lots of wood 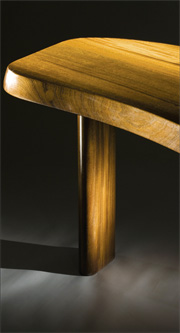 There is a popular story that, in 1927, the young Charlotte Perriand was politely ushered out of the Paris studio of the famed architect Le Corbusier.
She had walked into his office looking for work as a furniture designer. Le Corbusier took one look at her elegant female form and said, “We don’t embroider cushions here.”
Le Corbusier never made the same mistake again. The young woman he ejected from his studio went on to become one of his closest collaborators.
Her passion for metal left no room for her designs to include feminine touches, and certainly not embroidery.
Not only did Perriand go on to thrive in an industry that was predominantly male, but she introduced long-lasting design concepts to furniture manufacture that employed, for the first time, heavy industrial materials like steel, aluminum and glass.
By the time she died, at 96, her remarkable series of tubular steel furniture pieces, produced at Le Corbusier’s architectural studio, had triggered and sustained a world movement in contemporary design. Her famed tube-steel swivel dining chair remains in production to this day.
The first retrospective of her work in Seoul, at the Kukje Gallery, is the second in a series of modern furniture exhibits. It follows their 2006 exhibit that featured Jean Prouve, a leading French furniture designer who worked extensively with Perriand.
The show demonstrates the varying styles employed in her work between the 1930s and the 1960s, including her mahogany table, cloud bookshelves with a sideboard and a black lacquered bent steel chair.
The works on display represents typical features of her designs.
There is hardly any decoration. The elaborate colors and shapes, which are often seen as the trademark of French interior decor, have been excluded. The chairs and cabinets she designed are bold and plain, consisting of a few geometric lines that stress flexibility.
Her ideas and designs had a wide appeal to the working and middle classes, as Perriand stuck to the utopian belief of “l’art de vivre” (or art for life), which stresses the idea that good furniture should be accessible and affordable for all.

Perriand’s beliefs about design were closely linked to her political beliefs, which were heavily influenced by major events like the Wall Street crash and the years of depression and war that afflicted her era.
Her vision had a radical influence on her male colleagues, whose bourgeois conventions and impractical traditions often ruled the design scene. Where they emphasized over-elaborate flourishes and expensive fabrics, she focused on simple lines and basic materials.
She embraced the social ideals of her time, and actively brought them into her design.
“I am conscious of and in synch with my times,” she once said. “They are mechanical: in the streets the beautiful cars wink at me, they are clean and shining. I adorn my neck with chromed-steel beads, my waist with a coat of mail, my studio with chromed steel.”
Perhaps the turning point of her career came between 1940 and 1946 when, in her 40s, she lived in Asia, first in Japan as a design adviser to the Japanese government for products being exported to the West. Then, when Japan joined the war as Germany’s ally, she went to Vietnam, and studied local crafts and woodwork. This exposure to Eastern art had a tremendous influence on her later works.
She shifted from metal to wood; the notion of “void” in Japanese design led her to refine and simplify her earlier designs, creating pieces that were even more minimalist. 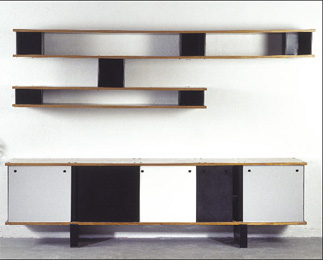 The style earned her a name as a designer of “classic contemporary furniture,” which was manifested in her taste for classic materials used with a contemporary edge.
The Charlotte Perriand exhibition starts on Friday and runs through June 30 at Kukje Gallery. To get to the gallery, go to Anguk subway station, line No. 3, exit 1. The gallery is a 20-minute walk from the station. For more information, call (02) 735-8449. The gallery is closed on Sundays.