One soldier’s search for unquiet souls

One soldier’s search for unquiet souls 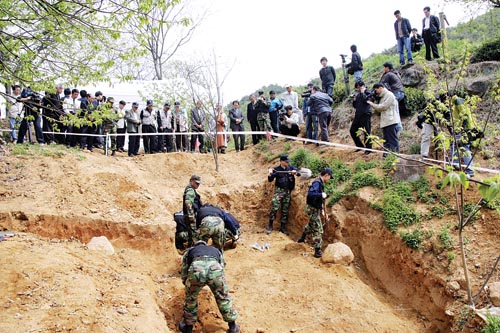 Remains of student soldiers are exhumed on April 24 in Hadong County, South Gyeongsang province. Jung Hyo-myeong, who fought as a student soldier during the Korean War, witnessed the operation. [JoongAng Ilbo]

YEOSU, South Jeolla ― Jung Hyo-myeong was a hot-blooded sixteen year old, living in this peaceful town facing the South Sea, when he heard that the communist North Koreans were surging south with guns and tanks. It was June 25, 1950, shortly after the Korean War broke out.
Jung was then just an average high school boy. He looked forward to his music class and, as an oldest son, he was the hope of his family. But, from the moment he first pictured North Korean soldiers marching toward his hometown, he could no longer enjoy singing solos in the school choir. He felt he had to do something. With some of his fellow students, he decided to join the war as a student soldier.
On the morning of July 8, after hearing that North Koreans had conquered Cheonan city, in middle of South Korea, he went to the office at his high school in Yeousu. Full of fighting spirit, he told his teachers that he wanted to join the army. As a token of his commitment, he bit the tip of his third finger and wrote “devoting myself to saving the country” with drops of his own blood.
“I thought the war would end in three to four months at most,” Jung recalled, sitting in his apartment last Friday. “But I was wrong.” 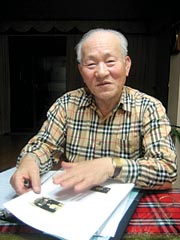 Jung Hyo-myeong, describes the memoir he has written about his teenage days when he served as a student soldier for the Korean War.

He left a note for his parents, seeking their forgiveness. He knew they would not want him to go to war. His parents wanted him to be a doctor, not a student soldier. “I had a mix of emotions, so I decided to stay up all night to write them a few lines,” Jung recalled.
The heat in his blood led him to the war, but he did not know, back then, that he would be firing an M1 Carbine rifle in less than two weeks and that many of his friends would fall by his side.
In the aftermath Jung was tormented by the fact that the bodies of his fellow boy soldiers were neglected for more than half a century, having been buried in haste in the midst of battle.
Jung, now a 73-year-old retired banker troubled by lumbago, tried to find the remains of his comrades for years, and his efforts bore fruit last week. A special task force, deployed by the Defense Ministry, found the remains of 11 student soldiers in Hadong County, South Gyeongsang province. Their search would have been much more difficult had it not been for Jung, who gave them vital information said Park Nam-soon, the sergeant major with the special task force from the defense ministry.
“Mr. Jung gave us information last January, which kick-started our investigation of the Hadong area,” explained Park. There are no records of how many student soldiers fought during the Korean War, Park added, but last week’s search was the first to find significant remains of student soldiers in a single location.
After watching the remains of his fellows being unearthed, Jung was relieved. “Now I can sleep more peacefully,” he said.
He may sleep better, but that does not mean he can forget the battle that took place on July 25, 1950. Together with some 180 other student soldiers from South Jeolla province, aged between 16 and 20, Jung officially joined the army on July 13, underwent training for less than two weeks and entered his first battle on July 25. 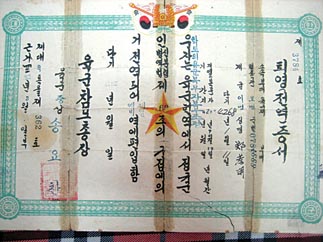 The certificate of Jung’s service in the army, distributed by the government.

He was issued a real M1 rifle and cartridges just a few hours before the battle. During training he had been given a wooden replica. Jung and his fellow students did complain, because they knew that it was wartime and everyone was facing adverse conditions. “But it was only after I was given a rifle that I felt like a real soldier,” he recalled.
Jung had much more to learn about the atrocities of war. First he witnessed the summary execution of two North Korean spies, caught hiding among the long queues of South Korean refugees.
The chief of Jung’s squad ordered the spies to be despatched by firing squad. “Nobody had any idea whose bullet killed the spies,” Jung said, “But all of us, even those not in the firing squad, felt uncomfortable.”
The firing squad incident was the moment when Jung and his fellow student soldiers realized they were in a situation where they would have to kill or be killed.
“From then on, I felt that a war is not a place for a young man’s blind bravery,” Jung said with a bitter smile. But by then he knew it was too late for regrets.
Jung’s squad chief had his own doubts about his student soldiers. He questioned whether they would be able to hold the front against professional North Korean troops. He decided to send Jung’s troop south, to Busan, the port city that became the interim capital of South Korea during the war.
However, the train carrying the student soldiers was stopped by order of superior authorities and ordered back to the front.
Jung recalls that the student soldiers walked for hours to get to Seomjin River in Hadong county.
On July 24, he said, their commander told them they must fight to the death to “stop the tanks of our enemies” and buy time to allow the U.S. Army to land on the Korean Peninsula.
“It was indeed a road to death for many of us,” Jung said. Hours later, at dawn on July 25, combat began. Jung calls the fighting “the Battle of Tapri,” which is the name of the nearest town.
“The Seomjin River was glittering in the morning sunshine,” Jung recalled. “And then I saw a parade of North Korean tanks and about 450 infantry soldiers marching south.” 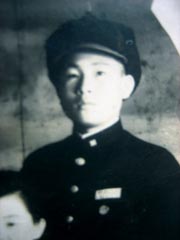 Jung in his school uniform shortly after he ended his war service. By Chun Su-jin

Jung said that the piercing sound made by the metal treads of the tanks is still vivid to his ears, even after five decades.
The commander of Jung’s squad took his first shot at the enemy. Then Jung fired his first bullet of the war. It was a surprise attack, to give the student soldiers some chance against the North Korean force, which was an elite contingent, Jung explained.
The North Korean army stopped advancing, and started firing at the student soldiers. Bullets pierced the air. Jung and his comrades tried to find some shelter. He thinks the battle continued for about three hours. Then he heard the commander order retreat.
After fleeing from the battlefield, the student soldiers gathered at a nearby elementary school. They found that 80 of their 180-strong squad were dead, injured or missing.
“I guess we were nothing more than cannon fodder,” he said. “Yet it was quite something that we held the enemy at a standstill for several hours.”
The soldiers could not take care of the dead bodies on the battleground.
“Frankly, all we could think of was how to save our own lives,” said Jung with a regretful look. “We did not have the time to care for fellow soldiers.”
From then on, the student soldiers fought several other battles over the next few weeks. In August, the number of student soldiers had fallen to 90, and they were scattered to either Jeju Island for further training or to other parts of the peninsula.
Jung himself fought on several battlefields. Then, in April of the following year, President Syngman Rhee ordered student soldiers to go home. In April 1951, Jung made his long-awaited return to Yeosu.
Jung went back to school, which was where he saw the end of the war in July 1953, when the armistice was signed. He found a job at a bank, where he served for decades as a branch manager. Happily married, he is the father of two daughters and a son.
He said he was “immensely lucky” to come back home and to lead an average life. Some of his fellow soldiers stayed in the army after the end of the war.
Without a good education, retired soldiers could not find decent jobs, Jung explained, and some of them now have to survive on poorly paid jobs such as guarding apartment complexes.
“They have a total of 16 to 17 years of service, which falls short of the 20 years required for a military pension,” Jung said. “They say that one year’s service during wartime equals three years in peacetime. Something must be done for the welfare of these former student soldiers.”
Yet, these retired soldiers are at least alive. The memory of the fellow soldiers who did not get a proper burial afflicted him. One such dead soldier was a close friend from childhood and Jung said that he used to avoid contact with the boy’s parents. “I persuaded my friend to join the student army, and I have a huge sense of guilt whenever I think about his family,” Jung said.
After Jung retired from his job, he embarked on his quest to bring comfort to the spirits of the deceased soldiers. In 1994, he established a group of former student soldiers and began to hold annual memorial services near the battlefield in Hadong County.

Jung also asked provincial governors to set up monuments to the student soldiers.
As time went by, however, Jung noticed that the number of old soldiers attending the ceremony began to decline. “If someone did not show up, it meant that they had died,” Jung said, and he decided it was time to increase his efforts.
“I was told that the villagers buried the bodies of the soldiers somewhere near the battlefield, but none of them seemed to be still alive to give me precise information,” Jung said. He started to ask around and contacted county officials. One of them came back to him saying that a son of a villager who buried the bodies was still alive. It was the break that Jung had been waiting for.
“I met him and checked out the likely area of the burial, and reported that to the Defense Ministry,” Jung said.
By this time Jung’s health was beginning to fail, his feet had started to go numb and he had to have spinal surgery.
His wife, Oh Wha-sun, said that Jung scheduled the surgery for last December to ensure that he would be able to witness the unearthing operation.
Park, at the Defense Ministry, said that the government is conducting DNA tests to identify the remains. They expect to have the results in a few months.
Even so, Jung thinks that last week’s discovery of remains should just be the beginning.
“There must be about 30 to 40 bodies of my fellow student soldiers somewhere in this land,” Jung said. “And we should find them all to end their decades of pain.”