Under these skies, there’s a trendy girl singing some groovy soul music

Under these skies, there’s a trendy girl singing some groovy soul music 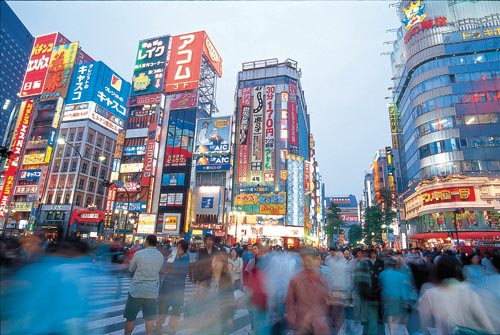 The Streets of Shinjuku [JoongAng Ilbo]

Tokyo seems continents away from Seoul and the brief two-hour flight from Incheon to Narita Airport failed to prepare me for the culture shock I felt upon arrival. Although the brashness of Seoul is one of the city’s charms, the discretion and courtesy of Tokyo residents immediately melted my defenses.
On the Tokyo subway, en route to my hotel, a man who appeared to be in his 70s walked toward a vacant seat and said a quiet “sumimasen” (“excuse me” in Japanese) as he passed by.
With delicate movements, he laid both hands on his lap and stared at the scenery until the train went underground. Then he took a book from his bag and read throughout the hour-long ride to the hotel.
In 20 years of living in Seoul, I’ve never seen anything like this. Usually my Seoul subway rides involve ajummas fighting for empty seats and middle-aged men shamelessly belching fumes from their last meal.
The tone changed as I got closer to my destination, Shinjuku station. My trip companion, who had been to Japan a couple of times in the past said, “I really feel like I am in Japan when, after arriving at the airport, I take the subway and see students in school uniforms.”
The scenery in the compartment changed as it filled up with girls in school uniforms, skirts shortened to the middle of their thighs, all carrying mobile phones with tiny Hello Kitty and Doraemon dolls attached.
Shinjuku, much like Seoul’s Jongno district, was neon-drenched. The narrow streets were vibrating with energy.
In contrast to Jongno, however, the crowd was much less homogenous. In addition to salarymen and college students heading for izakayas (Japanese sake bars) and beer pubs, there were baby carriages pushed by punkish parents wearing Bob Marley-inspired get-ups. Some of the babies had Mohawk hairdos.
The street fashions included everything from Vivienne Westwood check dresses to Louis Vuitton bags to basic beige cardigans and pencil skirts.
The next morning was a Saturday. My companion and I decided to hit the flea market near Meiji Park.
Along with the flea market in Yoyogi Park (the biggest in Japan), Meiji flea market attracts up to two to three thousand visitors a day. Both markets are open on Saturday and Sunday.
As we walked toward the central plaza we heard music from an acoustic guitar and an accordion coming from the opposite side where, on a stairway, two musicians were singing their hearts out. A lad, who appeared to be the third member of the group, was handing out flyers with their upcoming performance schedules.
One by one, an audience formed. Holding plastic bags full of assorted purchases, people began clapping in time to the music as they took a rest from shopping. 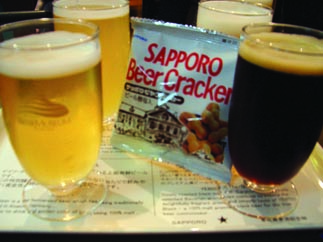 There were food outlets as well, serving beer, iced coffee, giant-sized hamburgers (think three Whoppers) and okonomiyaki (Japanese pancakes).
For the rest of the afternoon, we both spent less than 40 dollars each. However, we both felt a bit giddy, having got a bit of a beer buzz from a can of Asahi beer and some frivolous purchases.
If Shinjuku is Jongno, than Shibuya was Apgujeung-dong, Hongdae and Sincheon rolled into one. The area traced the arc of Tokyo’s recent history with old and new coexisting. Next to the famous statue of Hachiko the dog, fresh-faced bands were doing their thing with harmonicas, guitars and small drum sets.
The Hachiko statue has been the symbol of Shibuya since 1934. Hachiko (1923-1935) was an Akita dog who was raised by an agriculture professor at the University of Tokyo. It is said that every morning Hachiko saw his owner off at the front door and then greeted his return at the end of the day, waiting for him at Shibuya Station. After his owner’s death in 1925, Hachiko returned every day to the station to wait for him. This continued for the next eleven years.
The area is also known for giving birth to Shibuya-Kei musicians, such as Pizzicato Five and Flipper’s Guitar. Originating from this electrifying, ultra-hip area, these musicians took western music ― mostly bossa nova, jazz, lounge and French ye-ye music (Serge Gainsbourg and Jane Birkin in particular) ― and incorporated catchy Japanese pop elements to create a quirky, original sound that broke free of other genres.
Music is still a big part of Shibuya as record stores, both big and small, fill this retail district. A giant HMV, with five stories-worth of CDs and DVDs as well as Disk Union, a record chain selling more obscure albums and used LPs and CDs, exist alongside smaller used record stores.
As I browsed through Disk Union, I noticed young men, who appeared to be D.J.’s, flipping through the racks of LPs at light speed, like a banker counts bills.
I ended up buying a used Mahalia Jackson CD, a Fats Domino CD and a Pizzicato Five album, all for under 25 dollars.
Another benchmark district in Tokyo is Harajuku, known to be a hangout for the more wildly dressed.
The funny thing is that this mazelike neighborhood filled with punks, Goth Lolitas, and Visual-Kei dressers, is just a street away from the Cheongdam-dong of Tokyo, Aoyama, a district that includes the jaw-dropping Prada store which has a facade that looks like a quilt made with bubbly panes of glass.
The two extremes don’t exactly match; on the street where they meet it seems like a collision of two different worlds. 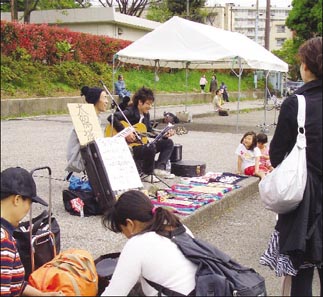 An amateur band performing in Meiji Park. By Cho Jae-eun

As luxury is the operative word in Aoyama, whimsical and playful is the best way to describe Harajuku’s shops. There is Marion Crepes, the best-known crepe booth in Tokyo. If you’re unlucky, you need to wait in line for quite a while as the store is often busy. Another fixture is Kiddy Land, a five-story building holding almost every kind of character and doll on earth ― Mickey Mouse and Care Bears to Pokemon and Anpanman, you name it and they’ve probably got it in stock. Daiso is a large “100-yen shop,” where most of the products cost 100 yen. It is one of those places where you end up buying 100 dollars worth of junk and say “What would I ever need this for?” It was a ball, nevertheless.
A delightful break from shopping awaited us at the Yebisu Beer Museum, just two stations away from Harajuku near Ebisu station. Between the Meguro and Shibuya areas, the Ebisu district was known in the past for its Sapporo Breweries but it has recently been attracting upscale tourists with the opening of Yebisu Garden Place, which includes a pleasant promenade and luxury hotels like The Westin Tokyo.
The beer museum closes at 6 p.m. and all day visitors line up to get a sample plate consisting of four different kinds of Yebisu beer (Major Weiss, Yebisu Beer, Kolsch and Yebisu black), all fresh out of the brewery.
In tiny 150 to 200-milliliter glasses, the sample plate costs a mere 400 yen. The Yebisu black, not found in Korea, left the biggest impression as the subtle but deep flavor of the beer included a surprise at the end with a strong aftertaste of espresso.
Tokyo has great cafes. Starbucks for one, is cheaper than in Korea and even affordable local franchises, such as Doutor, serve strong, Italian-style coffee. There are also an abundance of small cafes and bars across town that are run by artists or musicians, playing interesting records in humble, charming interiors that tell the story of those who have been involved in each little business. One example was the Cafe See More Glass, run by the music group Kuki Kochan and their friends. This tiny cafe, in the basement of a building in Shibuya, sells postcards, CDs (a compilation CD of the musicians who are involved in the cafe, and Kuki Kochan CDs) along with coffee and tea.
Measured by area, Tokyo is a fairly small city and I was there for eight days but, by the last day, I couldn’t quite imagine going back to Seoul.
The streets of Tokyo, it seemed, revealed a surprise every time I turned a corner. For example, it took me three days to see Harajuku, an area much smaller than Jongno.
With a Doutor coffee in hand, I boarded my plane and waved good bye to the city. Pizzicato Five once sang, “Under the sky of Tokyo, someone is singing some groovy sweet soul music.” I want to see those skies again soon.


Yebisu Beer Museum
The Nippon Beer Brewery started making beer here in 1887. Created in 1890, Yebisu beer is, by sales, the second-ranked beer in Japan, after Asahi. For 400 yen, you can taste four different kinds of Yebisu draft beer. The museum is located on the left side of Yebisu Garden Place, opposite the Mitsukoshi Department store near Ebisu subway station. Hours are from 10 a.m. to 6 p.m. For information go to www.sapporobeer.co.jp/brewery/ebisu.

Kiddy Land
Kiddy Land has more than 80 branches throughout the country. It carries a vast quantity of stationery and dolls. One can find every kind of character including Ninja Turtles and Minnie Mouse to Japanese characters like Kerori and Hello Kitty. One of the biggest is in Harajuku and is open from 10 a.m. to 9 p.m. For more information, visit www.kiddyland.co.jp.

Disk Union
This chain store has outlets all over the city. Some branches are specialized, like Reggae Disk Union, Progressive Rock Disk Union and Jazz Disk Union. Opening hours differ but for most stores they are from 11 a.m. to 9 or 10 p.m. For more information, visit http://diskunion.net.

Doutor
A Japanese coffee company founded by Toriba Hiromichi, it serves inexpensive cups of coffee and tea and branches can be found all over Tokyo. There are also premier versions of the cafe chain serving Italian style brews. For more information, visit www.doutor.co.jp.

Daiso
This store carries thousands of small items for everyday use, from interior decorations to pens and notebooks, to clothes, underwear and pantyhose. Almost everything in the store costs 100 yen, much like dollar stores in the United States. Opening hours are 10 a.m. to 10 p.m. The two biggest Japanese Daisos are at Gunabashi and Kinshicho.

Marion Crepes
Ham and cheese, sausage, blueberry and chocolate crepes are among the favorites and it can get very busy here. The store is located on the main street of Harajuku, near Harajuku station. Hours are 11 a.m. to 8 p.m.