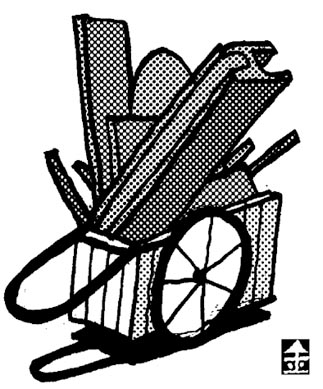 High watchtowers are built in the center of small towns in many places across Japan.
There are small bells on top of them. These bells, called “hansho,” were used as a fire alarm. Japanese people who have lived in wooden houses all of their lives dread fire the most.
Residents organized a fire fighting team voluntarily and watched over the town 24 hours a day. The 911 calls and sirens have now taken the place of the watchtowers and hansho, turning them into symbols for regional towns.
Hansho-dorobo. This Japanese word originally meant bell thief. However, according to the dictionary, it means a tall person, tall enough to steal the bell on top of the watchtower. Regardless of whether these people are actually tall or not, hansho-dorobo don’t frequently appear in Japan anymore.
In one prefecture called Ibaraki, a total of 40 hanshos disappeared. The towns were amazed at the thieves’ technique, as they were able to steal heavy bells that weighed tens of kilograms hung 5 to 10 meters (16 to 32 feet) high.
This is not the end. Air-conditioner fans, steel ropes in mountain paths, guardrails, wire nets and steel items that can be sold are also targeted.
In Saitama Prefecture, a slide in a playground disappeared, leaving only the stairs behind. In a mountainous area in Kanagawa Prefecture, the roof over a public toilet disappeared entirely. These thieves have fantastic skill in stealing steel, making the conventional methods of stealing steel and iron bars from construction sites seem commonplace.
The price of metal items such as as steel and copper has skyrocketed.
According to a recycling organization, the price of steel jumped five times compared to 5 years ago. The price of copper is four times the price in 2001, the highest ever. One major reason is the construction boom in China, with the Beijing Olympics and Shanghai Expo coming up. The Japanese assume that China is also the final destination of the hansho.
With control and regulation, the theft of steel will eventually decrease. However, bigger problems still remain.
The ever-increasing speed of the demand coincides with the exhaustion of metal resources. Gold, silver, zinc and tin will likely run out in just 15 years.
Other resources are also limited, so recycling is the only alternative.
Nearing its defeat in World War II, Japan’s army confiscated every piece of metal, including spoons, bowls and even the bells at temples. The present situation reminds us of those catastrophic days.