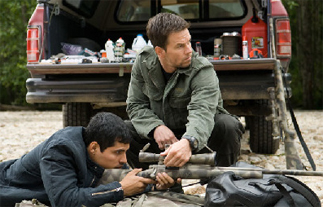 Flag-waving, adrenaline-pumping, save-the-President movies like “Shooter” haven’t really changed all that much over the years.
Someone’s after the president, the best agent/soldier/detective ever (now, of course, retired and jaded because of a dark incident in his past) is called in to stop him, but (gasp!) all is not as it seems.
This formula is so old and overused that one wonders why Bob Lee Swagger (Mark Wahlberg) doesn’t see it all coming. I suppose it’s possible that between covert sniping for the Marines in Ethiopia and the subsequent three years of living as a survivalist hermit mourning his dead spotter, Bob never got the chance to get to a movie theater.
At least “Shooter” puts the betrayal we all know is coming right at the beginning of the film. The men in black, led by the quiet, ruthless Colonel Johnson (Danny Glover), who approach Swagger to help him “prevent” an attack on the president are in fact setting him up to take the fall for the assassination of an international diplomat.
Of course, they later turn out to be the same government contractors that left Swagger out in the desert, where his spotter (Lane Garrison) was killed.
Understandably, this all has Swagger a mite miffed.
The film’s twist is its focus on the sniper corps. Wahlberg supposedly went through training with a real former Marine Corps sniper, learning to hit a man-sized target from 1,110 yards away. That seems like overkill, but it’s emblematic of the film, which features Swagger toting a staggering variety of weapons all certain to get a big reaction out of gun freaks.
The slogan of the Marine Corps snipers is, “You can run, but you’d only die tired,” and the reason for that is certainly on display in “Shooter.”
Against a trained Marine with a high-powered rifle and a quick-thinking spotter keeping track of variables like distance, wind speed, even humidity, very few enemies stand a chance.
Other parts of the film seem more inspired by the Tom Clancy “Splinter Cell” series of computer games, with Swagger setting up remote-controlled explosives and going for silent kills from dark hiding places. “Shooter” is one of those films that would definitely be more fun if it was interactive.
That’s because aside from the unusual sniper spin, the film is a run-of-the-mill, blow-’em-up action flick. Wahlberg acts like a grungier version of Steven Seagal ― gruff, violent, pissed off, but ultimately not very sympathetic. The girl he gets, the widow of his dead partner (Kate Mara), is equally unengaging.
Michael Pena’s turn as the bewildered greenhorn FBI agent who’s the only one to believe in Swagger is almost endearing, but as the film leaps off the deep end in the second half his character is relegated to sidekick duty.
Politically, it skews toward the libertarian, with a survivalist hero who doesn’t trust the government, didn’t like the last two presidents and firmly believes in Al Capone’s old maxim, “You can get more with a kind word and a gun than you can with just a kind word.”
Watching “Shooter” in the immediate aftermath of the Virginia Tech shootings probably makes this last aspect a bit more controversial than the producers might like, especially since the title is precisely the term used to describe Cho Seung-hui, who killed 32 people and then himself, wielding semi-automatic pistols in both hands.
If the movie could take a position in the debate, it would certainly be the same one the extreme right has aired on the 24-hour news networks, “If only all those college students had been armed,” a patently insane idea that many loopy Second Amendment defenders nevertheless continue to advocate.
Most of them will see “Shooter” and, instead of taking it as light summer fantasy, see it as another piece of evidence against gun control, which just reminds us how lucky we are to be out of range of even the most powerful of the American gun nut’s sniper rifles.
They’ll be taking the film too seriously. Of course, a pro-gun control liberal who protested the film would be doing the same. In the end, “Shooter” is just a Western vigilante movie, updated with shinier weapons and bigger explosions.