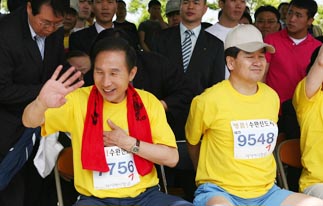 On May 13, presidential candidate Lee Myung-bak took part in a marathon to commemorate the May 18 massacre in Gwangju. By Oh Jong-taek

It is not easy to make people stop fighting, and fights between couples and family members are especially hard to handle. A third party cannot understand the complex and subtle emotional conflicts or the extent of animosity among family members. Therefore, the police and government officials normally refrain from interfering in family quarrels, unless a concerned party lodges a formal complaint or files a lawsuit in court.
The confrontation between the two presidential hopefuls of the Grand National Party, Lee Myung-bak and Park Geun-hye, is a sort of a family feud. The two are not giving an inch over the issue of whether to change the rules of the party primary, with each loudly proclaiming, “I am right.”
Whatever their squabble, some might feel we should leave it alone as their own problem. Most press outlets take the position of criticizing both sides, calling the fight unseemly mud slinging. After all, reporters do not want to be in the middle of a family dispute and they may also worry that the party could become angry if they tried to decide who was right and who was wrong.
For neighbors, family disputes are harder to ignore if they continue for a prolonged period of time or become too loud. In this case, the GNP may have nothing to say, even if a third person intervenes, because the party, which should speak for the people, seems to be so wrapped up in its fight between its presidential hopefuls that it is at a loss as to what to do.
Former Mayor Lee holds the key to the problem, because he is in the stronger position right now. Normally, the person who has more power and riches should do favors for others. For a long time now Lee has been ranked first in public opinion polls ― and not by a small margin. He is ahead of former party Chairwoman Park by a substantial margin.
It is obvious that he has to prepare for the worst case in which a few hundred votes in the primary could decide victory or defeat. However, if a person who has plenty tries to have too much, the people will not look at him favorably. There is no reason for Lee to feel like he is being treated unfairly by saying, “Why should I give in always?” After all, if Park were in first place and Lee in second, people would ask Park to make concessions. The people demand generosity of those with power and they easily feel sympathy for the underdog. Leadership must come with the willingness to accept loss and to remember the deep emotions that can be stirred upwhen a powerful leader makes concessions.
It is said that there are people in Lee’s camp who see this as the time to thrash Park. This means that negative feelings have built up over time as Lee suffered from Park’s angry demands in the past. Although this may be understandable, Lee’s supporters need to step into Park’s shoes. Would Lee have remained calm if he was the one following behind in second place?
It is also said that a family feud is much fiercer than other fights. Many brothers have become bitter enemies after fighting over a family fortune. Even in the ruling camp, we see politicians criticize each other, claiming that their opponents are engaged in “viper politics” or “old-fashioned politics.” Still, the feuding governing party factions at least say they should unify behind one candidate at a later stage.
Under such circumstances, if someone in the Grand National Party says that Park should just leave, that she would be of no help to the party in the presidential election if she is defeated in the primary, it is out of arrogance. The party must have a different attitude. It must say, “We will appreciate it if you stay in the party, even if you lose in the primary election.” Too many times we have seen the negative effect of politics as a zero-sum game, in which any opponent becomes an enemy.
If things go that way, it can lead to a situation where the public is disappointed in the game and loses interest. Needless to say, there is not much chance that Park will really give up running in the primary election. However, if it happens, the people may just ignore the Grand National Party’s primary election. Lee will then have to face the people’s criticism: “He gave up the rules for a small benefit.”
What will happen if Park does not participate in the primary election and continues her criticism of Lee for voiding the rules? He will be weakened and will have to face the crossfire of the governing camp all by himself throughout the 210 days of the election campaign.
“If the proposal for a rule change is sent to the National Committee, it will lead the party to division,” Assemblyman Nam Kyong-phil said. “We have to accommodate former Chairwoman Park’s opinion,” said Assemblyman Bae Il-do. “I have a feeling that former Mayor Lee’s opinion is a little excessive,” said Assemblyman Hong Joon-pyo. These are not politicians close to Park, but they see that it is not Park who should be beaten up, but the primary rules.
This case should not go to the National Committee, but to the people’s hearts. The GNP must listen to the popular feeling and walk on a broad road. There is a simple solution: “Be considerate of those who are weaker.” This is what Lee himself stressed on Thursday, after he registered as a candidate.
He must remember his words and heed them.