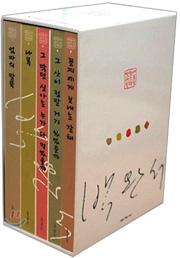 Park Wan-seo’s selected works will please her readers. Her books, which have been translated into several languages, are somewhat autobiographical in nature.
She writes with great sincerity and, in doing so, she helps expose the trauma suffered by people who survived the Korean war.
The collection consists of five novels. “Mother’s Stake,” is based on the suffering endured by the author’s own family and it looks at a struggling single mother who lost her husband during the colonial regime under Japan.
The package also includes “The Naked Tree,” Park’s first novel, which she wrote when she was 40. The book, which began as non-fiction, is based on the author’s friendship with Pak Su-gun, who began his artistic career as a portrait painter doing cheap drawings of American soldiers stationed in Korea.
“Who Ate Up the Singa” is another autobiographical novel based on the author’s wartime memories and is set in the ruined city of Seoul. “To Dream of a Mountain” is a romance which features a young woman in her 20s and it unfolds against the backdrop of a shattered urban landscape in the aftermath of the war. “Praise to the Losers,” was originally written as a gift for her 15-year old son, as way to encourage him to never give up hope, even during days of pain. In a tragic irony, the author later lost her son to an accident. In this new edition of the novel, Park includes a separate chapter about the pain she suffered when her son died. By Park Soo-mee