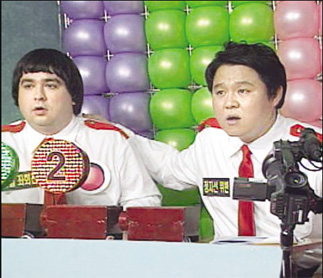 A scene from “The Headquarters of the Campaign to Make a Good Country.” [KBS-TV]

One of my personal principles is that I will never have a car so long as I make my living writing newspaper stories about everyday lives.
I believe I must continually expose my five senses to everyday occurrences on the streets and subways. My mother laughs at this rule, saying it’s the poorest excuse she’s ever heard for being afraid of driving.
Well, she has a point, but it’s also true that I love the voyeuristic joy of riding on public transport.
I mean, there is no better place than a Seoul subway to find scenes like a senior citizen in pure white shoes and a bright red war veteran’s hat, giving a speech about who should be president and how to save the sinking ship of the Korean republic, while protecting it from daring attacks by Commies.
The sights I currently enjoy most include the driver of the 7612, my daily bus, who enjoys stepping on the accelerator even before the red light turns green. He also likes cursing other drivers whenever they break the traffic laws.
For a long time he defied an edict issued by the bus company that he should give every passenger a greeting. Recently it seems he has surrendered, for he has started to greet me with a reluctant “Good morning.”
It’s interesting to see him trying to smile with his lips while maintaining an irritated look in his eyes. He is at least doing his best, even if he swings from Dr. Jekyll to Mr. Hyde every few minutes.
I wish dear Mr. Driver could have a happier life, but he has too many everyday hassles to deal with, like traffic rule violations. Of course, he could watch “The Headquarters for the Campaign to Make a Good Country.”
Airing at 9 p.m. on KBS2-TV every Friday, this show’s mission statement is: “I want to live in a good country now.” It aims to correct what it sees as the bad practices and customs of this country.
One segment is dedicated to traffic law violations. The M.C.s of the show go looking for violators. When they spot one, they interview the driver, who has been caught red-handed. The M.C.s then ask the drivers to hit their heads with a gourd.
After the gourd attack, the M.C.s have balloons full of flour suspended above their heads. These pop after the number of traffic violations hit a certain level.
In last Friday’s episode, the M.C.s suffered several hard blows in a row. I respect their sublime self-sacrifice, but I was left wondering what kind of practical change could result from such pointless actions.
Furthermore, I don’t want to frustrate the producers and M.C.s, but it is apparent that they have failed ― there have been 350 episodes so far but things still have not improved much. I guess it’s a tough job to tackle.
My question is how the producers define a “good country.”
I mean, the word “good” is extremely subjective. People talk about objectivity, but all of us have different backgrounds and environments and thus have different standards about what counts as good.
For example, I once complained about the rough driving of Seoul bus drivers to a Japanese friend of mine after a trip to Tokyo and some impressive encounters with gentle bus drivers. Yet, the Japanese friend told me that she was fed up with the excessive vigilance of Tokyo’s bus drivers. In the end, everything is relative in this world, with millions of individuals having their own sets of values and preferences.
Meanwhile, I hope life is treating my bus driver well, because it would be a pity if he quit his job before the KBS2-TV show fixes the traffic problems of this country, although he might have to wait a long time. I’ll just have to keep my fingers crossed and enjoy his ambiguous smiles.