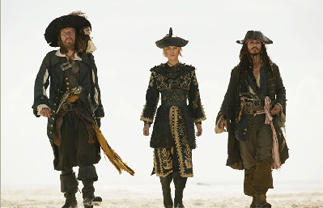 Anarchists love pirates. And not just the procrastinating, college-aged MP3 downloaders ― they love the 19th century scurvy dogs of the high seas with the parrots and the wooden legs and the international linguistic festival centered on the expletive “Arr!”
Some of these lawless scoundrels, they say, were a great example of anarchy in action, working together when their interests coincided and making decisions and electing leaders by democratic vote.
Whether all that’s actually true or not is still a subject of scholarly debate, but one thing’s for sure ― the pirates of the world were (and still are) selfish bastards.
And that idea has been exploited to entertaining effect in the “Pirates of the Caribbean” series, which saw an encounter with the opportunistic, megalomaniacal, vaguely effeminate pirate captain Jack Sparrow (Johnny Depp) transform two perfectly respectable British subjects, Will Turner (Orlando Bloom) and Elizabeth Swan (Keira Knightley), into dastardly schemers.
The second film, “The Curse of the Black Pearl,” in particular used its characters’ conflicting desires and two-faced nature for adventure and laughs, recalling the great Hollywood ensemble farces of old like “It’s A Mad, Mad, Mad, Mad World.”
Now it’s come time to wrap up this trilogy, but like so many franchise finales, the new “Pirates of the Carribbean: At World’s End” tries too hard to tie up every single loose end (or baton down every single loose hatch) and ends up losing all focus on character or theme.
The other big problem with the new flick? Not nearly enough Johnny Depp.
Depp was the rusty, barnacle-covered anchor of the first two films, his whimsy breathing life into what was otherwise just another summer adventure. His physical comedy in “Curse of the Black Pearl” was some of the best in a major Hollywood film in decades, driving home how funny a pratfall can still be if there’s a real actor behind the bewildered, knitted brow.
But in “At World’s End” Jack Sparrow is reduced to a bit player, with the return of Captain Barbossa (Geoffrey Rush) from the first film, taking over the Black Pearl, along with the spooky voodoo witch Tia Dalma (Naomie Harris); the creepy, tentacle-faced villain from the last movie, Davy Jones (Bill Nighy); the big British naval baddie Cutler Beckett (Tom Hollander); Will’s dad Bill (Stellan Skarsgard) (was his grandpa named Phil, I wonder); not to mention a slew of new pirate lords and ladies including a Singaporean in wrinkly prosthetics played by Chow Yun-Fat.
With so many characters, each with their own crosses to bear and plots to work out ― there’s hardly any room left for Sparrow. His months alone in the underworld have driven him a bit nuts, and his long conversations with hallucinations of himself are amusing, but this movie focuses more on straightforward cannon battles, explosions and the love story between Swan and Turner, which is awkwardly thrust upon the movie without any warning past the halfway mark and leads to a sudden and very jolting end.
Then there’s the movie’s biggest miscalculation ― a fight-for-survival plotline that pits the pirates of the world, with their Pirate Court, Pirate Code and Pirate King, against the forces of law and order. But wait, I hear you say, if the pirates have laws and lords and royalty, what makes them any different from the East India Company? What about that rational self-interest the anarchists got all excited about?
The answer, of course, is that a desire for a massive battle between naval armadas led the filmmakers to conveniently forget what made the last movie so endearing. (What’s even more confusing is that the armada battle we’ve been all worked up to expect never actually happens.)
The special effects are still just as incredible in this outing as they’ve always been. The crabmen of Davy Jones’s crew are back. Cannons fire, bridges collapse and hazardous things happen to a cute monkey.
But where the first two films were surprising, absorbing, funny and tautly entertaining, this is just one enormous action set piece after another. “At World’s End,” though decent summer entertainment, doesn’t rise above its genre like its predecessors did.