Being a D.J. is enough to make a girl’s head spin

Being a D.J. is enough to make a girl’s head spin 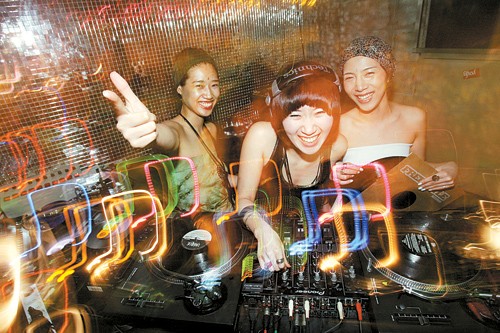 From left: D.J.s Miryo, Flamenco and Sin “styling” at Club Via

Last Friday night, the robust rhythms of Hongdae made the local alleyways pulsate.
The busiest part of this mecca for Seoul’s alternative culture is its club street, starting at a narrow path across from the Far East Broadcasting Company. About halfway up this thoroughfare is Club Via, where Triple House, a female D.J. crew (consisting of the D.J.s Flamenco, Miryo and Sin), was preparing to put on a show.
As I made my way past two macho doormen, the vibe was all masculine until I got inside the club, where I encountered layers of deep pink rose petals spread on the steps that descended into the incense-filled club.
With a gold bindhi on her forehead, D.J. Flamenco came to greet me. “It’s oriental night,” she said, as she explained that the Triple House members had been busy preparing for the night all week. “We all took part in the decorations, as well as preparing to spin.”
That’s unlike her male counterparts, most of whom would be embarrassed to be caught with rose petals in their hands. And the differences don’t end there.
Triple House decided to create their all- female crew two years ago and made their debut last November. In the United States and Europe, where club culture has had more time to advance, female D.J.s are still a minority. In Korea they have, up to now, been virtually non-existent.
D.J. culture started in the 1950s, when male radio disc jockeys started to play early rock and roll tunes at live events. The techniques, including the first turntable systems for D.J.s, were developed by men, and the field has been male-dominated since then.
There are fewer than 10 resident female D.J.s in Hongdae, an area with the country’s greatest density of clubs in this country.
“It was hard to be taken seriously at first, especially with so few female D.J.s,” said Miryo. “I should not be saying this to a newspaper but I started out as a D.J. in booking night clubs.” By “booking night club” she means a club where rendezvous between men and women are arranged by aggressive servers.
“if you want to make money you work at a booking night club,” said Miryo. “The D.J’s there get so many gigs but that’s not the kind of career I wanted. The D.J.’s there don’t pay so much attention to the music because that’s not what those kinds of clubs are for.” 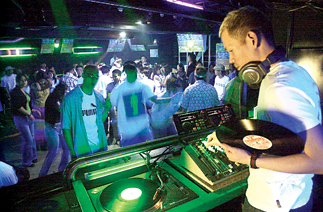 Miryo a resident D.J. at Club Circle, as well as being involved in groups like Break Bakery, Triple House and Low Budget Sound, Miryo is a full-time D.J., although “the money isn’t that good.”
Venus, a party organizer and club manager, agrees that D.J.ing is not perceived as a full-time job in Korea. She is an Australian native who manages Club Cargo as well as being an organizer for Eden, a female group of artists and musicians, including D.J.s, which holds exhibitions and parties around Seoul (Flamenco is a part of this collective).
The D.J.s all agreed that initially, getting the attention of managers or audiences is easier as a female. “Being a female attracts attention, but it stops at that. After being recognized, you have to fight to compete with the boys,” Flamenco said.
This image-based competitiveness sparked a big controversy in 2004 on the Los Angeles club scene, when an up-and-coming D.J. named Tatiana Alvarez was featured in Playboy’s annual music issue. Alvarez’s nude pictures led to a variety of important gigs, frustrating male D.J.s who had worked much longer for their time in the limelight.
In an interview earlier this year, Alvarez said, “I don’t regret Playboy, but I wish I had been more established before I did it. ”
As with other fields, female D.J.s often get asked to play the sex card. “I have gotten offers from men in this industry, in which they say they will teach me D.J.ing skills or introduce me to other D.J.s if I, well, you know,” said Miryo, inferring that she been asked to trade sex for favors.
“I’ve had a few problems with guys hanging around the D.J. booth with their mouths open,” said Venus.
Apart from these problems, the technical aspects of D.J.ing pose challenges for many female D.J.s. “I am the worst tech-phobe in the world. It was very hard to learn all the equipment and stuff,” said D.J. Sin. Flamenco agreed and then pointed to another issue. “I think it’s difficult for girls, even for me, to rev up enough energy to totally dominate the floor. It’s not that we lack passion, but physically, it is quite draining,” she added.
“Many female D.J.s just quit. It gets too hard after a while,” said Miryo.
However, Triple House members are determined to succeed.
“Music is very hypnotic and powerful,” said Flamenco, who spent time in Tokyo a few years ago studying record engineering. “I hope more women become D.J.s and bring a new kind of energy.” Sin said the appeal of D.J.ing is almost irresistible. “Music can make you cry, laugh or get angry. Why wouldn’t I get involved in something this magnetic?”
Venus said Eden’s has big plans. “In June, we’re going to have a kind of masquerade ball in Itaewon. There will be a puppet show, a movie screening by a female director, D.J.ing and belly-dancing, among other events,” she said. 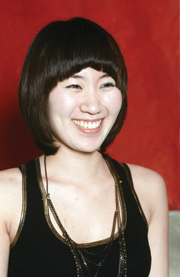 Real name: Jung Sun-a
Formerly, she was a resident D.J. at Itaewon Bar Nana. Currently, Flamenco is a resident D.J. at Club Cargo. A member of Triple House and Eden.
Started D.J.ing when she went to Japan and got immersed in the club culture there three years ago.
She mostly plays deep house, deep funky house and electronic house. “In school, I mostly listened to rock and hip hop but as I got more into house music, I realized that it is very sensual and deep. It is quite repetitive but inside the repetitiveness, there is a bright energy. People think it is just music to dance to but to me, house music is much deeper than that.” 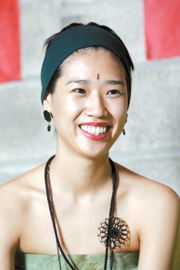 Real name: Park So-hyun
A member of Break Bakery, Triple House, Low Budget Sound and resident D.J. at Club Circle.
She plays vocal house and electronic house at the moment.
“I wanted to be a musician since I was a little girl. I went to talent agencies, looking for a record deal but it was hard. Then I started going to clubs.
When I saw what D.J.s did, I immediately knew that was what I wanted to do.”
She met Flamenco and Sin two years ago through mutual club friends.
She wants to start playing guitar this year. “Ultimately,
I want to release records.” 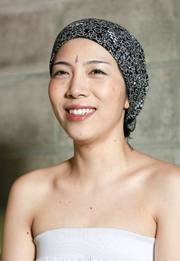 Real name: Kim Hey-sin
She does gigs at Itaewon’s Bar Nana and is part of Triple House and Soul Vouse.
She started D.J.ing as a hobby when she was still a fashion designer.
She mostly plays deep funky house. “I am really into Chicago style house music.
My style is minimal, with special effects.
“I really don’t like the fact that Hongdae, which was filled with avant garde artists and musicians, has become so commercial. Many don’t come to clubs for the music.
It’s mostly to rub bodies with other people, aka ‘boobi-boobi culture’ [Boobi in Korean is slang for rubbing against someone).”