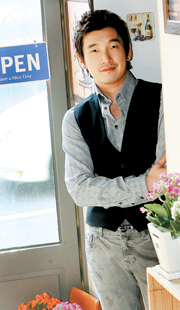 Actor Cho Seung-woo, who is starring in “Man of La Mancha.” By Choi Seung-sik

For 27-year-old actor and musical star Cho Seung-woo, acting and being on stage is his reason for being alive.
He selected the musical “Man of La Mancha” for his upcoming Aug. 3 show at the LG Art Center in southern Seoul. The response has been impressive; earlier this month, 16,000 of 19,000 seats sold out in 15 minutes. Last year, he set records by selling 7,000 seats in eight minutes for the musical “Hedwig,” and 7,700 seats in 25 minutes for “Rent.”
As a film actor he maintains a deep and youthful image, starring in films such as “Marathon,” and “The War of Flower.”
Recently, the JoongAng Ilbo asked him to choose between films and musicals. “In the past, I rejected that kind of question,” he said. “I thought it was like asking a child to choose between his mom and dad. However, I think it’s time to choose one ― musicals.”
“Man of La Mancha” is the piece that initially brought Cho to his chosen career. When he first saw the musical in middle school, he dreamed of becoming the main actor. After his debut, he received requests to play the lead role. However, he turned them down claiming he lacked “the wisdom of age.” Fourteen years have passed, and now, he’s ready.
“As a child, I was an introvert and didn’t have a dream. However, the moment I saw my sister Cho Seo-yeon, a musical actress, appear on stage in ‘Don Quixote,’ my heart started beating like crazy. That is when I decided what I wanted to do in life.”
Attending Kaywon High School of the Arts and majoring in theater and film at Dankook University, Cho said: “When I first went on stage, I was so nervous that I even thought of running away. But when the actual performance started, I found myself absorbed in the acting. This energy sprouted from deep in my heart.”
This is why Cho prefers musicals to films. “The cameras make me nervous, especially still cameras. Photographers and reporters find actors like me hard to understand, but it really feels like pretense to stand in front of a still camera and create feelings,” he said. “On musical stages, though, especially in little theaters, I get to make eye contact with the audience. It gives me more confidence.” 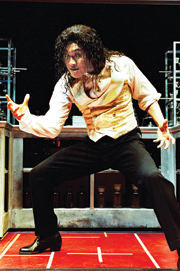 In “Man of La Mancha,” the main character, Cervantes, performs his play “Don Quixote” in jail with the prisoners. The lead is a double role, which Cho has some experience with. He starred in “Jekyll & Hyde.”
“Critics said I was 100 percent miscast for ‘Jekyll & Hyde.’ I was small in appearance with an incomplete, young and high-pitched voice. But the character of Hyde was a low-voiced, big man. Musical actor Nam Kyung-joo told me, ‘The voice and size don’t matter; it’s the heart inside of you.’ The difference in the age of the character and the actor was of no importance. In ‘Hedwig,’ I ignored the plot and concentrated solely on finding the character’s identity,” Cho said.
Cho’s debut was in director Im Kwon-taek’s film “Chunhyang” (2000), which achieved no success. “I became timid. I wanted to hide,” said Cho.
With that harsh beginning, Cho went to Daehangno, where he pursued his long-time dream. “Even though I had to sleep on park benches, I was still happy,” he said. He remembers producer Kim Min-ki’s “Blood Brothers,” and “Linie 1 ― Musikalische Revue” (Subway Line No. 1) fondly.
“I like producers who compliment more than punish and those who believe in me,” he said. Brought up in a divorced family with an absent father, Cho said, “Instead, I have met many ‘fathers’ and ‘uncles’ on stage.”
Speaking of “Man of La Mancha,” Cho said: “It’s a musical that makes you think of the changes in life. As my life was moved and influenced by the piece, I hope that my performance can bring little changes in the lives of the audience.”