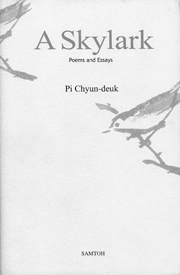 “A Skylark” (Samteo) is a collection of poems and essays by Pi Chyun-deuk, a veteran writer who died last Friday at the age of 97(see article below right). Translated from Korean to English by some of Korea’s top English scholars, the quality of the translations, which were done over 30 years, is clear. They read smoothly and the selections are based on some of Pi’s signature works, including “The Secret Garden” and “A Letter Sent to Paris.”
The poems and essays in this fine collection reflect Pi’s plain style of writing, which dwells on the commonplace moments of life. Pi is something of a literary alchemist who turns seemingly plain depictions of his surroundings into celebrations of life. Somehow even simple phrases, like “flowers will make a handsome gift,” sparkle.
In his quirky sense of humor, the reader senses a youthful optimism that transcends the traumatic stresses of war and poverty that defined his generation. This is hopeful, witty writing: “I am a dad, an old dad. I have always regretted that I could never be a mommy. I envy mommies, especially young and pretty mommies with their nurslings.” His essays also give a glimpse into the fascination with Western culture he shared with many of Korea’s earlier intellectuals. (Pi studied English literature at the University of Shanghai, and taught at Seoul National University). When he marvels about the Boston Symphony, Charles Lamb and Robert Frost, it becomes evident that his habit of writing “for his own pleasure” easily becomes the gift of a man who knows how to touch his readers through words.

Get it and keep it 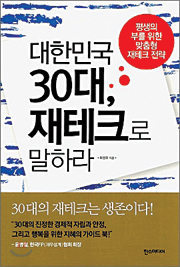 “How to Make Money in Your 30s” (Hans Media) is a follow-up to a book by the same publisher that sought to tell 20-somethings how to get rich. The book was a bestseller here for months.
Now, Choi Seong-woo, the author of a popular Internet column on money-making tips for Korean salary workers, talks about ways to gain “healthy wealth” as you get older. So if you did not make your pile of money in your 20s, all is not lost. His rule for staying on top is simple, but it requires discipline. He writes, “Save for tomorrow’s meal today.” Choi explains that by your 30s you should be able to manage and plan for lifetime wealth. Saving money in your 30s, he says, is essentially “a tool for survival.” The book explores common dilemmas and concerns shared by mid-career office workers who have limited incomes and rising expenditures, offering some tips on financial management without professional help. Yet, he warns, saving money in your 30s does not mean earning extra money, but knowing how not to lose money. Wealth management over a lifetime, he says, is the only way to prepare for your future. 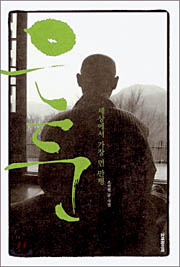 “Seclusion: World’s Farthest Windfall” (Long Future) is a book about 33 modern-day Buddhist monks and missionaries who came to a spiritual awakening through religious practices while they were hidden away from the eyes of the world. Written by Jo Yeon-hyeon, a religion reporter who went on several pilgrimages to India and secluded Himalayan villages, the book delves into the grand themes of existence and subjects like life and death, freedom and peace.
Jo details the life of a monastery, with descriptions sprinkled with lively anecdotes. For example, he describes one monk’s approach to insects: “He never used insect repellent in hot weather. In mid-summer his robes were smudged with the dark blood of mosquitoes who gorged themselves to death on his blood.”
The author also talks in detail about the monks’ religious routines. “When he went to sleep he lay with his right shoulder on the ground, like Buddha did,” he writes of one monk. “He folded his blanket over four times to make a floor cushion, and placed it on top of his chest. When he did, the blanket did not touch the ground, which allowed the wind to penetrate his body. Then a student unfolded the blanket and covered the top of his body, knowing the wind might make him cold. When he watched his teacher through a gap in his door, he had already folded his blanket back to its previous state.”