Weekend trips lead to book about a dad, his daughter and architecture

Weekend trips lead to book about a dad, his daughter and architecture 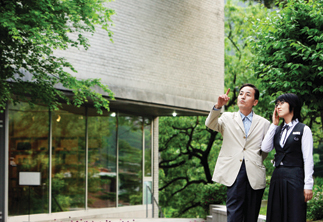 Weekend afternoons typically are a time of rest for most Korean fathers.
But for Lee Yong-jae, a 47-year-old architecture critic, it’s a time to guide his wife and daughter to architectural sites.
Recently, Yong-jae wrote a book, “A Trip Around Architectural Sites with My Daughter,” published by Mento Press, which introduces 40 locations they’ve visited.
The book is about his life as an architect and art under the influence of modernization.
It’s been seven years since the pair took their their first trip.
The places they have visited so far include:
The Catholic Martyrs’ Shrine in Jeoldusan.
Kyungdong Church.
The French Embassy.
Whanki Museum.
The Anglican Church of Korea.
The Jungtosa Temple.
Muryangsujeon in Damyang, South Jeolla.
Sudeoksa Daewoongjeong in Yesan.
South Chungcheong Province.
Jeongrimsaji Museum in Buyeo.
Yong-jae and his 16-year-old daughter, Hwa-young, often visit the same place again and again when they feel strongly about it.
“We visited Sudeoksa Temple four times and Byeongsan Seowon Buseoksa a couple of times,” said Yong-jae.
Hwa-young selected Midang Simunhakgwan (a literary house) in Gochang, North Jeolla, as her most memorable place.
Lee’s desire to share the historical, political, social, cultural and artistic facets that are part of the edifices is so great that not even bad weather will stop their trips.
Once an editor for an architecture magazine, Yong-jae also worked as an architect.
He quit, however, because the severe working environment did not suit him.
Since then, he has been working as a taxi driver.
In 2003, he posted articles on the Internet about architecture and has even published a book, “Pure Water Has No Fragrance.”
His wife also majored in architecture and is currently working as an interior designer.
The two promised one another to give their child opportunities to experience diverse cultures through traveling, and not forcing her to study.
“When raising a child, the role of a father is crucial,” said Yong-jae.
“He is the one responsible for a child’s misconduct.
“He should spend more time with children instead of playing golf.”
Yong-jae advises that fathers study trip-related materials before heading out.
Hwa-young shows great interest in her father’s guidance.
She asks many questions.
“Dad, what is a regent?”
“Is the Jayu Center [in Namsan] related to former President Lee Seung-man?”
“Why isn’t the Walkerhill Hotel named in Hangul like the Chosun Hotel?”
Yong-jae’s method of raising a child is based on the teachings of Confucius and Mencius.
Being a descendent of Lee Deok-hyung with the pen name Haneum (1561-1613), Yong-jae grew up under a Confucian family environment.
“Confucius stressed out that one should live without greed and do good,” he said.
Every day, Yong-jae sends Hwa-young text messages with Confucian sayings or idiomatic Chinese phrases.
Regarding her father’s somewhat excessive guidance, Hwa-young says, “It’s not fun but it sure helps.” She is thankful when she learns in school about the places she has already visited with her dad.