Looking for fun and feeling gloomy

Looking for fun and feeling gloomy 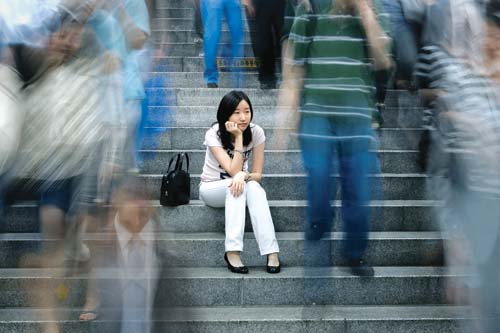 Hong Ye-jin, one of the “Gloomy Generation,” seeks solitude in pursuit of her true self. By Jeong Chi-ho

A few years ago eating alone in public was the last thing that Choi So-a would have considered doing. Now, after many years with a busy social life, Choi chooses to eat, drink and travel by herself on a regular basis. It does not mean that this 30-year-old single woman has given up her social life. As an artist who specializes in traditional Korean craftwork she meets lots of people. But she now makes sure she has some time alone on most days. She has discovered that being alone is something to enjoy, something that is necessary in her life. Korea has recently adopted a term for people like Choi ― the Gloomy Generation, or simply, the Gloomies.
Choi shrugs off the negative connotations of the term, although she protests that there is “nothing gloomy” about being a Gloomie. She is well aware that her home country is a place where people do things in groups. “What can I say? I used to feel safe in groups and pitied single diners in the past,” Choi says, claiming she has decided that life is too short to care about what others think.
Yet the world is not so ready to leave her alone. Sitting in her favorite bar enjoying acid jazz and a cocktail, she has to be alert to fend off flirtations. So why does she take the trouble to be alone? “To be truly me,” she says.
“I used to think that making an effort to understand others was the key to life,” Choi says. “But now, I don’t want to bother to understand others. I don’t have time for that.” Then she adds, “I’m not ignoring other people, though. I am just ignoring the nuisance of forming relationships with others.”
Choi defines herself as an individual who needs time to herself to avoid the hassles of social life. Her prerequisite items for survival include an MP3 player and, sometimes, earplugs, to isolate herself from the noise of the crowd. Getting her to agree to an interview demanded time and effort. At first she insisted on answering questions through cell phone text messages. Then she agreed to meet online, breaking her rule of minimizing contact with strangers.
Choi’s pursuit of gloominess is not an isolated phenomenon. It’s no longer a surprise to spot people sitting alone in cafes. And there are a growing number of people who choose to go alone to movie theaters and playhouses.
According to the Greek philosopher Socrates, humans are social animals, but the Gloomie enjoys the pleasant melancholy of being alone. Jang Hye-jin, a clinical psychologist who specializes in interpersonal relationships, notes that the Gloomie is representative of a new trend. “Korea is traditionally a society that values membership in a group,” Jang says, citing the fact that Koreans like to call each other by honorifics that refer to the person’s position at work or in a family. “Yet this group-oriented culture has been changing and a new tribe has emerged.”
She says that it’s “not unhealthy” for the Gloomie to spend time alone because such people “enjoy a gloominess that is under their control.” She notes that the Gloomie are different from those who lock themselves in their rooms for fear of relations with others, known as hikikomori in Japan. “Being a member of the Gloomie Generation does not mean that you’re unhealthy,” Jang notes. “Yet it could still indicate a form of narcissism, as they may be people who are in love with themselves.”
The artist Jeong Sung-hee recently held an exhibition called “The Gloomie Generation” at the Kwanhoon Gallery in Insa-dong, central Seoul. Her paintings depicted a little girl riding a bicycle or swimming alone and her inspiration came from her own experience of being a Gloomie. Like the girl in her pictures, Jeong likes to go to the movies and galleries alone and she enjoys being her own companion.
Jeong was glad to see many of her fellow Gloomies at her exhibition and she is planning a sequel with the same title in the fall. “The important thing about the Gloomie is that we are not sick people who are hiding our feelings,” Jeong says, “We are just honest enough to express our feelings. After all, life is not always beautiful, and we are bound to feel gloomie sometimes.” 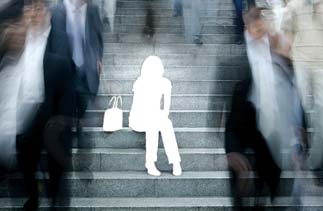 Park Ji-young, 28, is majoring in museum studies in Paris and finds the rise of the Gloomy Generation reveals much about Korean society. She says that the Gloomy Generation is a concept that could only exist in a society like Korea’s, where the “politics and ideology of being in a group matter so much.” Park used to go museum hopping skiing by herself and she remembers some of her friends calling her a “foreigner.”
“Koreans have certain rules for doing things,” Park says, “It is considered normal to go to movies with friends or lovers and, at work, you are supposed to eat together with colleagues and bosses.” Park does not need to put herself in the Gloomie category because, in France, choosing solitude is unremarkable. But, she adds, “If I were in Korea, I would gladly be one of the Gloomies.”
The term “Gloomy” makes Hong Ye-jin feel ill at ease. A college student majoring in traditional Korean music, she rejects the term because she feels it is predicated on the idea that seeking solitude is abnormal. “I just want to do things on my own, so I do it for me,” she said. “Why is that gloomie?” Hong likes to go to the noraebang, a Korean style of karaoke, and she goes alone, which is quite a rarity. “I just want to sing, and I just go there alone to sing,” Hong says, “There is nothing gloomie about it. It’s fun.”
There are statistics that demonstrate the rise of the Gloomie. Choi Kyung-man, a public relations manager with the ticketing Web site Ticket Link, says that his company saw a 14 percent increase in single ticket buyers from 2005 to 2006, and the number is still rising. “It’s not ‘whom to go with’ but ‘what to see’ that matters most for the single ticket buyers,” Choi notes. Yoon Yeo-jin, of the major multiplex chain CGV, says that some 9 percent of their ticket buyers are single patrons.
Some businessmen are seeking to capitalize on the trend. Jung Byung-cheol has launched a singles menu for his barbecue restaurant, despite the stereotype that people like to eat barbecued meat in groups, and he has a bar designed for single customers. “I decided to cater to the single diner trend,” Jung says. “It’s almost impossible to find a place where you can enjoy barbecue alone.” Jung’s singles business has been a great success with some 10 million won ($10,775) in net profit per month.
Oh Sang-yoon is a hair stylist at a salon near Hongik University and he rarely allows more than one customer inside his shop. Oh is a Gloomie himself, and he runs the place alone. He says he is repulsed by being and working with others. For Oh, working alone means freedom from the hierarchy that is a big part of most Korean businesses. “Many of my customers are like me ― they have a Gloomie spirit,” Oh says, smiling.
Yet there are some people who are made to feel uncomfortable by the Gloomies. “I can’t help thinking of them as strange people,” says Kim Si-chul, a 30-year-old office worker, who values social relations. “I think they just enjoy looking cool to others. Why do you have to sit in Starbucks if you want to be alone? You can simply take the coffee out and enjoy it alone at home.” He adds, “If you are truly gloomy, you would not say with a sense of pride that you are a Gloomie.”
Still, this criticism does not appear to change the mindset of a Gloomie like Choi, who says, “I don’t care about what others think and say. I am just me.”

Are you a Gloomie?
Assess your character by choosing the statements that fit you best

1.I love doing things alone.
2.I am better at doing things alone instead of cooperating with others.
3.I think that I am different from others.
4.I don’t like caring about others.
5.I often think that everyone is meant to be alone.
6.Often I feel it’s hard and troublesome to be with others.
7.I have very strong likes and dislikes in relationships with others, and I always express my feelings to the people that I do not like.
8.I often get hurt in relationships with others.
9.I usually hear that I have my own way of dealing with things, and it’s unbearable when I think that others trespass on my thoughts, my space and my things.
10.I feel uncomfortable when I am near other people.