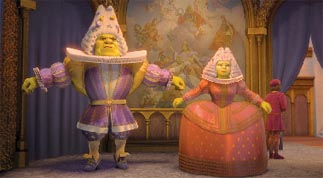 In the most amusing tableau of “Shrek 3,” the ogre and his princess squirm in their roi-soleil-style court dress.

In movie theaters, this is the summer of “3.” The season of budgetary excess and irrational cinematic exuberance began with “Spider-Man 3,” cannonballed through “Pirates of the Caribbean” 3, and now has finally arrived at the most venerable of the three franchises, “Shrek 3.”
The repulsive, green reluctant hero got his start way back in May 2001 in a startling fanfare announcing a powerful competitor to feel-good CG animation house Pixar. “Shrek” picked up the first Oscar to be awarded in the animation film category, and for a while it seemed DreamWorks might offer a snarky, quick-paced, vulgar antidote to Pixar’s Randy Newman-powered family melodrama ― the Warner Bros. to Pixar’s Disney.
Unfortunately it didn’t quite turn out that way, though DreamWorks has produced a few films notable for their animation if not for their characters, story or jokes (“Over the Hedge”), and “Shrek 3” comes off as a tired, by-the-numbers attempt to cash in on an aging franchise.
This time around, Shrek (Mike Myers) and Fiona (Cameron Diaz) fill in for the king (John Cleese) as he lays dying. They’re forced to go through all the pomp and ritual of court life, which of course Shrek finds utterly boring, and despite the inevitable Things That Go Wrong I’m inclined to agree.
Then the king dies, and desperate not to be named heir, Shrek sets out in search of the only other living successor, Arthur (voiced, surprisingly, by Justin Timberlake), who happens to be a nerd outcast at a medieval boarding school.
Back in Far Far Away, the spurned Prince Charming hears about the power vacuum and mounts an attempted coup d’etat accompanied by Captain Hook, Rumplestiltskin and an army of other Grimm and Goose losers.
The first two “Shrek” films adopted with vigor the concept of “plussing” ― writing the script, then cramming in as many little in-jokes and one-liners as possible. Where many of the first film’s jabs against Disney, Hollywood and consumerism found their mark, in “Shrek 3” this process feels less like addition and more like dilution, and the franchise long ago became part of the problem as far as overmerchandised phony show-business commercialism is concerned.
The high school sequence in particular crams every juvenile sitcom joke you’ve ever seen in a teen sitcom into just a few minutes ― unironically, and without any variation outside of the extremely “old-school” dress.
The stuck-up “princess” characters ― Rapunzel, Snow White, Sleeping Beauty, Cinderella ― have their roles expanded, but they serve little purpose other than to give the film the “grrl power” element that seems a prerequisite in American animation.
The one exception is a positively brilliant musical parody of the original “Snow White and the Seven Dwarves” that comes way out of left field, complete with tinny interbellum-style singing and cutesy forest creatures. As soon as it was over, I knew I’d seen the only flash of originality in the entire film ― and that was cribbed off a movie from 1937.
And unlike in other DreamWorks films, the visuals, tied to six-year-old designs, can’t save the day. The CG humans that seemed so incredible when they were introduced in the first “Shrek” have long since been left behind by the creative, cartoony designs Pixar adopted for its genuinely incredible “Incredibles.”
Though the human models in “Shrek 3” don’t quite sink into the “uncanny valley,” the animator’s term for computer models of humans so realistic that they, paradoxically, start to creep us out instead of inspire empathy ― think “Final Fantasy: The Spirits Within” ― the major new human characters in the third “Shrek” all look uninspiringly similar.
The first “Shrek” was a fun animated adventure, a milestone in CGI, and a still-topical parody of Disney excess and Hollywood superficiality. But it’s time for Shrek to hang up his hat and retire to his sludge-Jacuzzi in the forest. It’s disappointing to watch once-fresh characters bled dry until they’re no longer appealing. Perhaps the execs at DreamWorks need some quality time with an angry ogre before “Shrek 4” slides down the corporate assembly line.