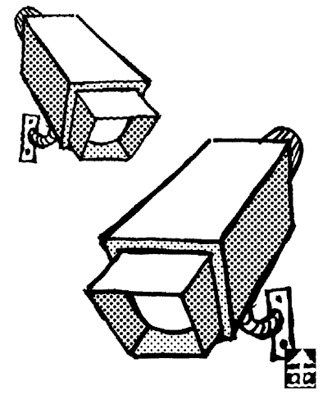 Signs featuring the word “show” are currently to be found everywhere. It is the catchphrase for a so-called third generation service promotion for a mobile phone company. TV commercials have also been bombarded with the phrase.
In the ads, the term “show” loses the negative connotations it had previously in contexts like “he’s making a show.” It seems to appeal to a young generation who are more proactive in expressing themselves, sometimes to the point of being aggressive.
The core element of the “show” service is a video feature that not only connects people but also conveys their physical appearance. The TV commercial depicts a young couple who want to see each other’s faces at every single moment, at least on the phone. But this service could be a bit burdensome to those who have are in a long relationship, since it could feel like a fetter that does not allow for any misbehavior. It could also be a surveillance machine to spy on children, spouses or employees. Thus arises a debate over encroachments upon privacy.
The “Street View,” a three-dimensional street map service newly launched by Google, is involved in a similar controversy. The Street View provides multidimensional maps for five cities in the U.S., including New York and San Francisco. It shows pictures that can be rotated 360 degrees. They are taken with a special camera and can be enlarged to show every nook and cranny. Because the resolution of the camera is more than 1 billon pixels, women sunbathing and men visiting a sex shop were all caught on camera. Regarding the privacy controversy, Google says the images are in a public area that anyone can see. Korean companies are interested in the commercial capacity of the service.
Invasion of privacy is becoming more severe due to technology. It seems like the realization of the Benthamite idea of a penal Panopticon that Foucault once criticized. Digital technologies make it possible to construct a central surveillance system that watches all prisoners from a tower. Foucault, in his book Discipline and Punishment, says the idea of control embedded in the Panopticon would ultimately prevail in general society and that social norms may themselves become a kind of panopticism. Well, it is already so. We put up with CCTV cameras because they prevent crimes, although we do not really like being watched. The Street View is already getting popular. The mobile phone, now like my fifth limb, could soon make me a constant prisoner. We are turning into a society that internalizes a control system as part of life’s daily routine.