A war without guns

A war without guns 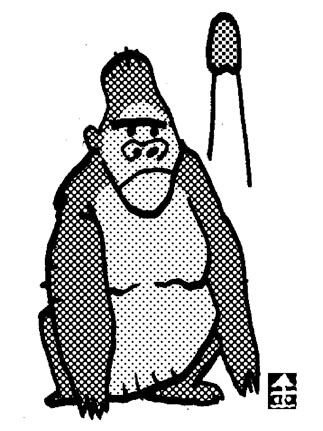 “Recycle Your Cell Phone-Save a Gorilla.” This might sound like nonsense, but it is a quite well-known theory among environmentalists. This is the story.
In every cell phone or computer is a part made from columbite-tantalite. This part works to maintain a certain high temperature. Tantalite is more heat-resistant than other metals and is good to use in small machines.
As almost every one in the world has become a cell phone user, coltan, which contains the tantalite, became a popular product to mine. However, in the Democratic Republic of Congo, the major producer of this resource, coltan was the start of trouble because its mining and distribution was in the hands of those opposing the military authorities. The opposition party dug coltan from mud in the riverside and made money for themselves. The internal war in Congo is heading towards an end finally after ten years, but the shooting is not stopping in the East, where the coltan is buried. However, the coltan mine is in exactly the same place as where gorillas live. As the mining has become active, the mountains and forests were destroyed, killing the gorillas by half.
We call metals that are hard to mine and refine or metals such as tantalite, which are scarce, rare metals. Some 31 metals including indium, tungsten, nickel and cobalt are defined as rare metals, and they are very useful in high technology. For example, indium is a must-have ingredient in making electrodes for liquid crystal displays or touch panels. Platinum is a jewelry itself but is also used as a catalyst in automobile waste gas or in fuel cells.
Another war is about to occur surrounding rare metals. In 50 years, almost all of the metals in the earth are about to show their bottom, but the demand is increasing year by year. Compared to five years ago, the demand for indium has increased 8.5 times, nickel 7 times and molybdenum 6 times. The largest metal producer, China, announced last month that it will increase the tax for scarce metals and strengthen the examination for some products. Authorities must have concluded that it is hard to keep up with the domestic demand.
Last week, the Japan’s Ministry of Economy announced a master plan to secure scarce metals.
For 7 scarce metals, it will store 60 days of stock and strengthen its resource diplomacy. In addition, it plans to come up with a mid- to long-term plan and find a country to import from besides China. The war for scarce metals has already started. The only difference with Congo is that it is a diplomatic war without guns.