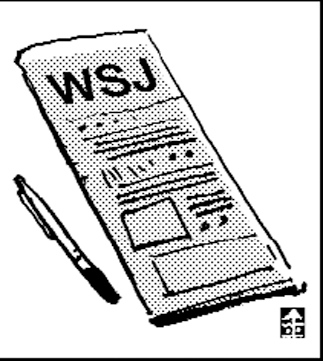 The profile of a premier subscriber of the Wall Street Journal, or WSJ, is as follows ― an average annual income of $191,000, a home worth an average of $2,100,000 and an average age of 55.
This is according to a survey of elite subscribers, including professional CEOs in September 2005. They are in the high-income bracket even by U.S. standards, a country with per capita GNP of $40,000.
Not only is the WSJ distinguished as the biggest economic newspaper in the world, with a daily circulation of more than 2 million, but its subscribers’ wealth is also the world’s highest.
They are very proud of their subscribers, as reflected in their self-described role as, “the financial power of Wall Street,” the spearhead of the free market economy. In an interview, Paul Steiger, chief editor of the WSJ, said that even though the New York Times is a great newspaper, there’s only a whiff of information in the economic section. Timely and exact M&A reports and in-depth news coverage, which won the WSJ the Pulitzer Prize 33 times, allowed him to enjoy the journal’s success. They reported the practice of insider trading in 1988 and the accounting fraud at Enron in 2000. However, there exist critical voices heard from abroad.
Kenichi Omae, one of the world’s leading business and corporate strategists, once said the WSJ is very much slanted to the U.S. so that he sees New York very well but he can’t find the rest of the world in the paper. This is the reason that it could not beat its British rival, “Financial Times,” in reputation.
However, there is the explanation that the WSJ stood as the symbol of Wall Street for more than 100 years. Newsweek magazine understands the key of the WSJ’s success is the independence of its editorial board. “The Bancroft family has respected the editors’ opinion in news coverage without interfering with the independence,” they wrote. Recently, Rupert Murdoch caused a shake-up at the Wall Street Journal.
Many in the American press oppose Murdoch’s bid to take control of the WSJ, saying that they cannot let Murdoch, who established the media conglomerate News Corp. using lurid, inflammatory content, get what he wants. Even the Financial Times is about to take action.
The IHT, very exceptionally, seconded. It pointed out that the most prestigious and dignified newspaper is about to be polluted by commercialism. Yet, Murdoch seems determined to buy the company, offering $5 billion. This bid tests how well the press can preserve the dignity of journalism in the face of the pressure of money.

The writer is a deputy business editor
of the JoongAng Ilbo.