Anniversary exhibition is a hair-raising event

Anniversary exhibition is a hair-raising event 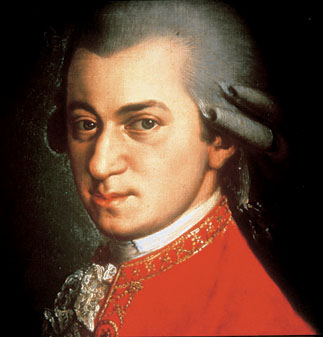 For the first time in Korea an exhibition featuring items from the life of Wolfgang Amadeus Mozart, including his piano and musical scores, will take place at the Sejong Center, central Seoul. Titled “The Wolfgang Amadeus Mozart Exhibition,” it will include around 200 items that were important in the life of the prolific European composer. The exhibition was organized jointly by the Salzburg Museum and the JoongAng Ilbo and is sponsored by the Austrian Embassy in Korea. It commemorates last year’s 250th anniversary of Mozart’s birth.
The exhibition is divided into twelve themes, starting with a section titled “My Birth and Life,” which displays Mozart’s baptismal certificate. The next section has portraits of influential people in Mozart’s life, including Antonio Salieri, Johann Sebastian Bach and Franz Joseph Haydn.
Other items on display include letters Mozart wrote to his father, Leopold, and other family members; the piano and violin he used during concerts; and scores ― including “The Marriage of Figaro” ― in his handwriting. There are even strands of his hair, which the organizers claim are being displayed for the first time in the world in this exhibition.
Mozart’s piano is one of the prized possessions of the Salzburg Museum. It was designed by Christian Bauman, a famous maker of musical instruments during the 17th century.
Along with these items, interactive programs are also available for children and young adults. In “I am Mozart,” visitors get a chance to use an automatic composing machine and adapt Mozart’s method of composition.
“Multimedia Concert” follows Mozart’s compositions so that visitors can see how the instruments are used in each of his pieces.

Mozart’s score for “The Marriage of Figaro.” Provided by the organizers

“Rococo Culture Experience” allows children to dress in Rococo era costumes while engaging in games from the period.
The Salzburg Museum first opened the exhibition last year and attracted more than 600,000 visitors. The original exhibition had 267 items on display.
The organizers say this is the first time that the Mozart exhibition has been offered in any country other than Austria.
jainnie@joongang.co.kr
The Wolfgang Amadeus Mozart Exhibition opens today and runs until September 15 at the Sejong Center, Gwanghwamun Station, line No. 5, exit 1 and 8. Admission is 12,000 won ($13) for adults, 9,000 won for students and 6,000 won for children under seven years old. For more information, visit www.mozart. co.kr.