Jazz in the key of life: Nah Youn-sun

Jazz in the key of life: Nah Youn-sun 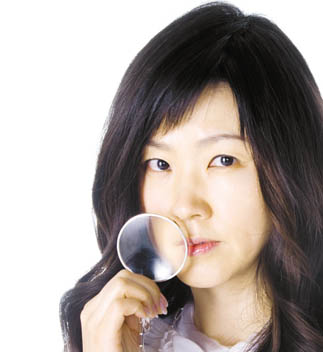 On a recent afternoon with a musician friend, the topic of “bean-paste”
girls (doenjang-nyeo), a term for shallow young Korean women who imitate the
lifestyle of hip and wealthy New Yorkers, came up over beer and chips. When
I asked my friend what kind of Korean music a bean-paste girl would listen to,
she replied, “Maybe Nah Youn-sun?” When I actually told the singer Nah
Youn-sun about this little conversation, she let out a hearty laugh and said, “That is so funny! I’ll have to tell my friends about that.”
This down-to-earth response was not what I had expected from the globetrotting
jazz singer. Her public image is somewhat wrapped in mystery as she seems quite picky about her public appearances and persona. The fact that she lives in both Paris and Seoul also makes her difficult to pin down, but talking to Nah was more like having a lively chat with a girlfriend than a stuffy interview.
Addressing my doenjang-nyeo comment, the musician seemed unaffected
and casually replied, “I think because the history of jazz in Korea is so short, people have a kind of fantasy about this genre and a stereotypical image about who listens to jazz.”
Although the 37-year-old singer was born to a choir conductor father and a
mother who is a well-known musical actress, Nah initially had no plans to pursue
a career in music. “It was by pure chance,” she said when asked how she
became a performer.
After graduating with a degree in French from Konkuk University, she
worked at an fashion design company.“Then almost like a dare, a friend urged
me to try out for a part in ‘Subway Line No.1’ [the musical].” She got hired for a supporting role. After this small part, she went to France and attended CMI, a jazz music school in Paris. While her softly expressive vocals won her praise, she admits to not being pleased by her tone.
“I had, well, I still have issues with my natural voice. I really wanted a deep
husky voice like Nina Simone or Billie Holiday,” said Nah, blushing a bit from
this confession. “But then, I don’t think I can live on alcohol and cigarettes like Billie Holiday did to get that kind of voice, so there you go,” she added with a laugh. Her voice, however, has made Nah a force to be reckoned with on the music scene in both Korea and France, as she performs frequently in Europe and appears at festivals in France. She has already released five full-length albums. Her fifth, “Memory Lane,” was released by Seoul Records this April in both English and Korean versions. Compared to her previous efforts, “Memory Lane” is clean-cut; her songs sound like classic pop standards. “Many people say that the new album is very ‘pop,’ and I agree,” she said, “I took out all the improvisation and stuck with the melody and main chords. I wanted to
concentrate on delivering the lyrics and the story.” 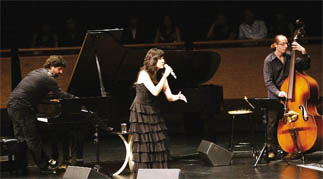 This new approach was applied to songs from some of the most prolific
Korean songwriters, including Cho Dong-ik, Kim Gwang-min and Ha Rim to name a few. “Some of these people, like Cho Dong-ik, were my musical idols
growing up. It felt surreal to work with them,” said Nah.
Concerning her career in France as a Korean musician, Nah responded
humbly. “There are so many people who are better singers than me,” she said with a smile. “Some people might say that I am trying to be overly humble, but I
think one of the reasons the French pay attention to my work is because I am
Korean and a foreigner.” She adds that she feels very lucky to live in France,
because of its history, cafes and music. Her next project is to record an album
in France with French harpist Isabelle Olivier. She plans to come back to Seoul
in the fall to hold concerts and perform at jazz festivals. “It’s an exciting life but an unstable one as well,” she said of her hectic pace. “I would like to settle down one day, but I feel that there is so much more for me to do right now.”