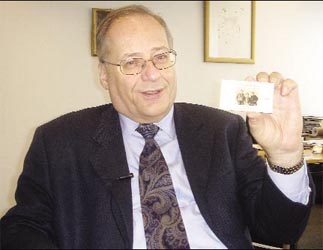 The mayor of The Hague, Wim Deetman, is a seasoned politician who has served as the education minister in the Dutch government. As the mayor of The Hague, Deetman said in an interview that he is well aware of the sacrifice of the special envoys, including Yi Jun, to protest the colonization of his country. Among the Koreans living in the city, there has been a move to designate July 14, the day when Yi died, as the “Yi Jun Peace Day,” and the mayor said he “fully supports” the idea. He is also scheduled to make a congratulatory speech at the international symposium this Friday where Yi Jun and the special envoys to The Hague Peace Conference will be commemorated.
Mayor Deetman is also directing a series of events that support a memorial for Yi Jun, such as an exhibition on Korean culture at the city hall building.
“There is a joint exhibition of Dutch and Korean artists with a photo exhibition on Korean tourism and cuisine,” Deetman said in an interview. The mayor smiled and added that there would be another exhibition on Guus Hiddink, who became one of the most popular Dutchmen among Koreans after he did so well as the coach of the Korean soccer team at the 2002 World Cup.
“The people of the Hague clearly remember the tragic tale of the Korean special envoys to the Hague Peace Conference,” Deetman said. “From now on, I will try more to spread the message of this tragedy of history to more people.”
By Chun Su jin [sujiney@joongang.co.kr]