The brave defiance of a principled man

The brave defiance of a principled man 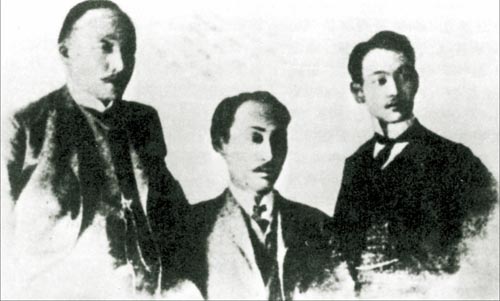 The three envoys who attempted to attend the 1907 peace conference at the Hague. From the left, Yi Jun, Lee Sang-seol and Lee Wi-jong. [JoongAng Ilbo]

On Wagenstraat in The Hague there is a three-story 17th century building with a small sign in Korean on its exterior. Above the sign an English translation reads “Yi Jun Peace Museum.”
The story behind this building’s modern-day function began one hundred years ago in July 1907, when Yi Jun arrived in this Dutch city after a 64-day journey. His mission was to win back the sovereignty of the Joseon Kingdom from Japan and its imperialist rulers.
Yi was one of the three special Korean envoys sent to the second Hague Peace Conference by King Gojong of Joseon. It was a meeting of world powers, including Russia, the United States and Japan. As the 1907 conference convened, the destiny of Joseon was at stake, especially after the 1905 treaty with Japan which deprived Joseon of its diplomatic rights. The treaty was signed without the official approval of King Gojong by five Korean officials, who are remembered ― and reviled ― to this day as Japanese collaborators. As a result King Gojong had to send Yi and his two deputies under conditions of great secrecy.
King Gojong’s idea was to let his special envoys have the chance to speak before the peace conference about the unfairness of the 1905 treaty. However, Yi and the special envoys were not given a chance to attend the conference and Yi is remembered because he took his own life “in a fit of anger,” according to historians.
Lee Kee-hang, who runs the museum in The Hague, said that he was drawn to the story of the special envoys when he came to the city 15 years ago.
“I came to know much more about Yi’s patriotism after living here,” he said. “I felt that I had to do something to commemorate his heroism.” To meet his goal, Lee decided to buy the hotel where Yi stayed and died. The hotel was called the De Jong and it was housed in a 380-year-old building that Lee has now turned into a museum, which he opened in 1995. Lee has collected some 200 artifacts connected to Yi Jun, including remains of the envoy’s letter of petition to the 1907 conference and his resume. 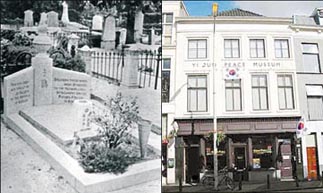 Above: The Yi Jun Peace Museum in the Hague. Right: Yi Jun’s tombstone in The Hague.

This week Lee is busier than usual, 2007 being the centennial of Yi’s ill-fated mission to The Hague. There will be a series of events this week, including an international symposium for Yi Jun on Friday, followed by a ceremony in memory of the special envoys on Saturday.
The events are jointly sponsored by the Yi Jun Peace Museum, JoongAng Ilbo, the Korean Ministry of Patriots and Veterans Affairs and The Hague city council, among others. There will also be an exhibition about Korea and a dramatic recreation of the arrival of the three envoys 100 years ago. There have also been a series of academic forums held in Korea.
Jang Young-sook, a modern history expert at the Organization of Korean Historians, hopes that the events this week will take the special envoys out of the history textbooks and bring them to life for a new generation. Jang described the special envoys as “patriots who carried the last straw of hope to stop the Japanese colonization of Korea.” Lee Kye-hyung, who teaches modern history at Kookmin University and is an expert on Yi Jun, welcomed the surge of interest in the special envoys. Lee added that further research is necessary to determine exactly what happened to Yi Jun and the envoys. There are questions about whether Yi’s protest suicide took place by hara-kiri ― self-disembowelment ― or through a hunger strike.
Jang makes special note of King Gojong’s efforts to retain sovereignty of his kingdom. “Since the late 19th century to the early 20th century, Joseon was a stage upon which world powers battled,” Jang explained. But after Japan was victorious in its wars against China and Russia, Japan claimed sovereignty over the Korean Peninsula. Jang believes it was Russia that sent a secret letter to King Gojong to encourage his participation at the Hague Peace Conference, as a way to seek the support against colonization from the international community.
However, after the Russo-Japanese War in 1904 ended in a victory for Japan, the geopolitical situation in the region changed rapidly.
“Russia saw no benefit in confronting Japan again, and sent another secret message to the conference leaders asking them not to seek contact with the special envoys from King Gojong,” Jang explained. “Back then, it was the general understanding that Korea would fall to Japan, and no world power sought to change that.”
Still, that did not stop Yi Jun’s 64-day-long journey, which began on April 22, 1907. Carrying his secret message from the king, he first went to Busan From there he sailed to Vladivostok and then traveled on the trans-Siberian railway to the Dutch city, arriving on June 25. During the journey he was joined by the other special envoys, Lee Wi-jong, who was fluent in several foreign languages including French and English, and Lee Sang-seol.
King Gojong had very particular reasons for choosing Yi Jun to carry his plea against Japanese colonization to the international community. Kookmin University’s Lee points out that Yi had a reputation for being an uncompromising man when it came to principles and justice. “According to historical documents, we have learned that Yi Jun was an incorruptible and upright character,” Lee said.
Lee, also the author of “The Last Special Envoy of King Gojong: Yi Jun’s Effort to Save the Country,” added that King Gojong thought highly of Yi’s character.

Yi obtained his initial government job by passing the first modern version of a Korean bar examination. He then became the first prosecutor in the modern sense. The Justice Ministry has recently announced that it will commemorate Yi Jun as the first prosecutor by erecting a bust in his honor and by restoring his letter of appointment.
Although Yi earned the nickname “God of Protecting the Law” for his uncompromising adherence to his principles, he also incurred antagonism from powerful figures in the Joseon court. In the course of this friction he was imprisoned or banished several times. In one instance he tried to punish a royal family member for plundering land from ordinary people.
In April 1907 Yi was ordered by King Gojong to draft a list of the people to be pardoned, an annual ritual in the Joseon court. Yi put forward the names of those imprisoned for trying to assassinate the Korean officials who collaborated with Japan in the signing of the 1905 treaty. When pro-Japanese officials at the court tried to block Yi’s list he filed a suit against his superiors for not accepting his demands. He had to resign from his prosecutor’s post. However, Lee notes, Yi had earned the trust of King Gojong, who was looking for the right person to send to the Hague conference.
Once he arrived in The Hague, Yi and the other envoys were met by cold shoulders and were not allowed to enter the conference. Lee said that the envoys did not give up. They appealed to the international press and succeeded in earning some support from the media.
“But press attention was not enough to change the state of the world power game. The mission ended in failure,” Lee said.
Yi died on July 14 following weeks of unsuccessful appeals to the world powers to stop Japan’s colonization plans. Several Korean newspapers wrote that he “committed suicide by self-disembowelment.” However, Lee refutes that idea as an “over dramatization.” Instead, Lee said that Yi Jun died after a hunger strike.
Meanwhile, Park No-ja, a noted Norwegian-born professor of Korean studies at the University of Oslo, countered Lee’s belief in his book “The East Asia That We Did Not Know.” Park argued that Yi Jun died after surgery on a swelling on his cheek. However, Jeon Jae-hyuk, the head of a civilian group that commemorates Yi Jun, vehemently denies that the activist died after surgery on a malignant tumor. “There is no doubt that Yi Jun committed suicide as a way to protest against colonization,” said Jeon.
Lee said, “Regardless of the rather unclear facts about the death of Yi Jun, what is clear is that Yi Jun sacrificed himself for his country.” The failure of the mission gave Japan an excuse to dethrone King Gojong, and from then on, Korea was on a fast track to colonization, which officially took place in 1910. The colonial period ended in 1945 with Japan’s surrender in World War II.
During a secret meeting with King Gojong, held after Yi had dodged the Japanese officials who surrounded the palace, the envoy is said to have spoken to the king as if reciting poetry. “Now I am going to the Hague as the special envoy,” he said. “Once gone, who will take a glass of wine to remember my death and cry?” This week in the Hague, the answer is: many.