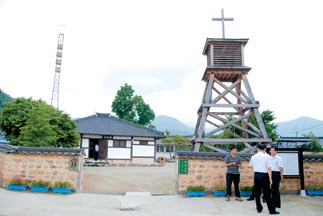 The entrance of Jacheon Church with its wooden bell tower in Yeongcheon, North Gyeongsang province. The church has stood here for 105 years. [JoongAng Ilbo]

YEONGCHEON, North Gyeongsang ― There are 700 Protestant churches across the country that have existed for more than a century. Jacheon Church in Yeongcheon, North Gyeongsang is one of them.
The church has remained the same as when it was built 105 years ago. It is also one of the few hanok buildings with a straight-edged roof. Most of the roofs of Korean buildings are curved.
At first sight the church is enchanting, especially with its wooden bell tower. It looks more like a building that should be sitting in a folk museum, rather than a church that still holds many services.
There isn’t a gate in front of the church. Instead there is a wall and at the main entrance to the church lies a foundation stone that has “chapel” inscribed on it. Shin Jeong-gyun, the church’s pastor, says the biggest change made in the last 105 years involved the church’s bell. “It was taken away by the government during the Japanese colonial period,” he said. “A new bell was installed in 1948.”
The inside of the church is more breathtaking. In the middle of the room is a huge screen, which dates back to when the church was built.
“The church was built at a time when the Confucians believed that men and women could not sit together after they had passed the age of seven,” Shin said.
According to Shin, men sat on the left hand side of the room while the women sat on the right. When looking toward the altar, the preacher can be seen but the people sitting on the other side of the room cannot. Additionally, there are separate entrances for the different genders.
Shin said without the screen it would have been impossible for both men and women to participate in a service in the same building at a time when Confucian beliefs were so strongly rooted in society.
The church was almost destroyed during the Korean War. As communist soldiers marched south in large numbers, the American military began raining down bombs on villages along the route. To save the church from becoming another target, the churchgoers climbed onto the roof and drew a huge cross with white paint and wrote “Church,” in large letters. Other than a house next to the church, other buildings in the area were reduced to ashes.
Last year the house that survived the bombing was left to the church when the homeowner owner passed away. The house is 108 years old. According to Shin the owner of the house credited the church with protecting it from the bombing.
“He wasn’t a follower of the church but we thank him for his contribution,” Shin said.
The church plans to use the new building as a place for prayer vigils and meditation. There are currently 30 members in the congregation, all of whom are residents of Yeongcheon. “When I sit in the church I can feel the piety of our ancestors,” said Lee Sang-rok, 50, whose parents attended the church.