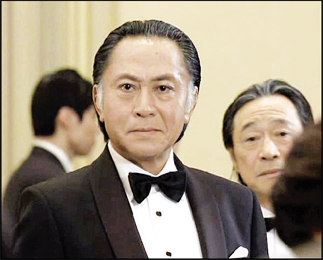 “The Magnificent Family,” a Japanese TV drama that debuted in Korea in both dubbed and subtitled versions. [XTM]

Once upon a time, I was naive enough to believe that Harrison Ford was speaking Korean when I saw him playing Indiana Jones on my television. With no knowledge of dubbing technology, I used to watch the film religiously, wondering how the blue-eyed actor could speak the language so fluently. Like any callow child, this was back when I still believed in Santa Claus and wondered how he and Rudolf could find the way to my house when we did not have a chimney. Shortly after setting an ambush for Santa Claus, I discovered that it was actually my parents who put presents under the Christmas tree. Around the same time, I learned the secret behind Ford’s amazing Korean ability.
Now, a couple of decades later, I am worldly enough to give in to the temptation of pirated films.
For films that are mildly interesting, but not enchanting enough to justify the price of a theater ticket, the 2,000 won ($2.20) charged for a pirated DVD is a quite attractive, at least to a material girl like me. However the problem with some pirate DVD purchases is that their subtitles are just a jumble. I am aware that most subtitles on pirated DVDs are done by amateurs. I learned this when I watched a downloaded Japanese TV drama that had lines like “This is my boyfriend’s birthday. Please congratulate!” appearing out of nowhere.
Still, this pirated DVD, “The Night at the Museum,” was particularly memorable. More often than not, the subtitles disappeared from screen to be replaced by lines in parenthesis that said, “I don’t know what they are saying. You figure it out yourself. Sorry!”
Well, that was definitely not what Ben Stiller was saying, and I ended up having to translate the lines for a group of my friends. My desire for an affordable movie night was lost in translation.
With these mixed memories about dubbing and subtitles, I found it notable that XTM, a cable TV network, plans to air the Japanese TV drama “Kareinaru Ichizoku (The Magnificent Family” in both dubbed and subtitled versions. The dubbed version began last week on Thursdays at 11 p.m., and the subtitled version airs on 10 a.m. on Sundays.
Kwak Dae-yun, an XTM publicist who was one of the main figures behind the decision, said that the approach was “the first of its kind on Korean TV.” It’s a first for a cable channel to air a dubbed version of a Japanese TV series, and it’s also the first to air both dubbed and subtitled versions in the same week. Kwak was proud of all these firsts, but the reason behind the decision is less memorable: “It’s like a last resort to boost the ratings for Japanese TV dramas, which have been getting the cold shoulder in Korea,” Kwak said.
Aside from the subtitle/dubbing issue, the broadcast of “The Magnificent Family” deserves some attention, in that it is one of the latest TV dramas from Japan. So far, Korean cable channels, which are free from the government’s ban on broadcasting in Japanese, have aired quite a few series from Japan, only to be disappointed by the startlingly low audience rating. XTM’s response has been to invest the time and budget to import “The Magnificent Family,” which has been top of the audience ratings in Japan this year.
Another factor that makes Kwak hopeful is that it stars Takuya Kimura, who is one of the top singers and actors in Japan, with a large fan base in Korea. Based on the novel by Toyoko Yamazaki, who is also the author of the hit drama “The White Tower,” the show explores the love-hate relationship between the father and son of a well-off family in postwar Japan.
Kwak said, “By airing the dubbed version, I expect to get more viewers, including the older generation, who have an antipathy against the Japanese language [from the Japanese colonial rule over Korea].”
He added that the dubbed version scored a high rating in its first week. I don’t want to disappoint Kwak, but it felt more awkward to see Kimura speaking in Korean in the dubbed version, now that I’m now old enough to know that there is no Santa Claus, Harrison Ford cannot speak Korean and neither can Takuya Kimura.