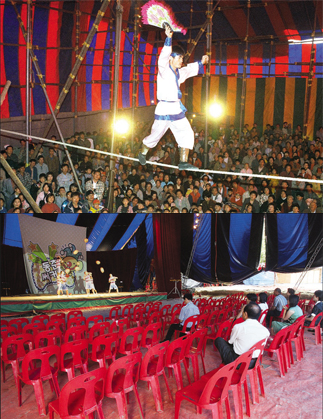 Top, A performer walks a tightrope at the Dong Choon Circus. [JoongAng Ilbo] Above: Although circuses were popular in the past, many of Dong Choon’s performances now play to mostly empty seats. By Kang Uk-hyun.

Sun-young, a 9-year-old circus performer, tumbles through the air, performing somersaults and spinning plates. She is only four-feet-three-inches tall and weighs less than 65 pounds, but her power as she does her floor routines suggests that her tiny frame is exceptionally strong.
Sun-young does not have a permanent address. Her only home is wherever the circus troupe stops to perform. Her father is blind and her mother is deaf. Absorbed in her training, the little girl lost the chance to enter elementary school and is illiterate. Her family’s home is a shipping container. Sun-young is the central character in the 2001 film “Sun-young’s Letter,” directed by Moon Hong-sik, but her tough existence has its foundation in real life.
The performers of the Dong Choon Circus Troupe, young and old, wander around just like Sun-young’s family. They struggle to live a stable life and their children yearn to receive an education.
Dong Choon, the oldest circus troupe in Korea, is currently in jeopardy. Founded in 1925 by Park Dong-choon, the troupe started with 30 performers. When the country was colonized by Japan and during the Korean War, the troupe played an important role in raising the nation’s spirits.
When this uplifting role was their purpose, circus troupes prospered and in the 1960s and 1970s, performers made good money. During that time, the number of performers with Dong Choon increased to around 250 and the troupe provided a launchpad for well-known actors and comedians including Heo Jang-kang, Bae Sam-ryong, Baek Geum-nyeo and Nam Cheol.
“Thirty years ago, the circus was a big hit,” said Park Sae-hwan, 62, the master of the Dong Choon Circus Troupe and also the chief director of the Korea Circus Association. “A two-hour circus show included magic and gugak [Korean traditional music].”
In the late 60s and early 70s, Korea had up to 18 domestic circus troupes, 20 musical troupes, 10 small-scale groups and 10 drum troupes. “There were around 130 groups touring around Korea,” said Park.
However, in 1972, things started to change.
“In April 12 of that year, the KBS TV drama ‘Yeo-ro’ [“journey” in Korean] began,” said Park. According to KBS, around 70 percent of the Korean population spent their evenings watching the show. “When ‘Yeo-ro’ was on, the streets were silent,” said Park.
Reminiscing, Park said that people no longer found the circus enjoyable nor did they have the time to watch its performance.
With “Yeo-ro” came a TBC TV drama titled “Ah-ssi.” The advent of these two dramas established the TV culture in Korea and people began to spend their leisure time in front of their TVs. Due to this cultural shift, performing groups faced new difficulties
“It was a crisis,” said Park. He also noted the development of the travel industry and an increase in the number of new movies.
With the appearance of color TVs in the early 1980s, the number of circus troupes dwindled to eight. 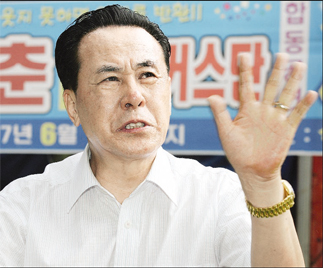 Ensnared by hardship, the troupes were often invited to perform at nightclubs. “Many were attracted by the offer because the clubs would guarantee the group 20 million won a month,” said Park. “Compared to what the performers received at that time, it was a large amount of money.”
By the year 2001, only three traditional circus troupes were left, and now there is only one. While plays and musicals attract a large audience, traditional circuses do not. Although Dong Choon is determined to ensure that the traditional circus culture survives, people are apathetic.
A recent scene from Children’s Grand Park revealed how little people care about traditional circuses. At the park, families and couples were enjoying a sunny Saturday afternoon.
Right beside them was a pentagon-shaped blue, red and white tent that was around 1,000 square meters in size. A loudspeaker announced, “The Dong Choon Circus will start its performance soon.” Inside the tent, there were only 12 viewers.
“The Circus is an all-around event for families,” said Park bitterly as he surveyed the rows of empty seats, “I don’t understand why people don’t come to the show.”
While tickets for musicals and plays start at 15,000 won, the maximum price of a circus ticket is 8,000 won.
Park also compared Dong Choon to Cirque du Soleil, the Canadian troupe that brought “Quidam” to Seoul.
“The price of “Quidam” tickets is unbelievable - despite its high price [seats cost up to 200,000 won], all 2,500 seats were sold out in advance for three months,” said Park.
Park said that Dong Choon has 18 acts while Quidam has only 12. He also pointed out that Quidam has only been in existence for 23 years.
“It’s a pity that despite our 82 years of tradition and greater performance know-how, people don’t recognize how significant we are.”
To give Dong Choon a boost, Park began researching how to create a high-tech circus performance like Cirque du Soleil’s Quidam, but failed due to lack of money and support. “At least 3 to 4 billion won was needed,” said Park.
There have been other efforts to enhance the prospects of Korea’s traditional circuses.
In the mid-80s, a one-hour documentary was produced by KBS. It attracted many viewers, and soon the troupe began winning extra sponsors. Several new circus groups were established as extra money flowed into the business.
In addition, in May 1996, the Ministry of Culture and Tourism decided to revitalize circus culture and it established a committee for this purpose. Over the next three years, the government funded and sponsored circuses as part of a seven-year-plan, which unfortunately collapsed in disarray.
“The people in charge constantly moved to other departments, so the program ended in chaos,” said Park.
He said that without fresh attention, circus culture will disappear.
Moon, the director of “Sun-young’s Letter” is distressed by the dismal future that seems to be in store for traditional circuses.
It was 2000 when Moon encountered the scene that inspired his movie. He was walking past Hwajeong Station, Gyeonggi.
“I was heart-broken to see a worn-out, dirty circus tent standing in the middle of a new, modern urban environment,” said Moon. He said the scene was jarring, the two elements appeared like oil and water, destined never to mix.
Moon paid a visit to the troupe and met a 7-year-old girl who became the basis for the character Sun-young.
“In real life, Sun-young had not even considered going to school,” said Moon.
Three days later the tent was moved to Incheon, where it was erected in an even more desolate location. The performers were living in container boxes, just as they did in his movie. “The troupe had to relocate five times that year,” said Moon.

The Dong Choon Circus Troupe performing at the Grand Children’s Park in Seoul. By Kang Uk-hyun


“In order to be a circus acrobat, you need to start before the age of ten,” said Park. “During the 1970s, young performers were taught privately. In the afternoon, they trained.”
Currently, there are six 13- to 14-year-old performers and they hardly receive any special education.
“In China, every city has its own circus school,” said Park. “Considering that it takes a year to master a flip and five years to walk on a tightrope, what these children need most is circus training.”
Moon is worried that if the performers are not guaranteed a stable life, they will leave and find other jobs.
“Because Dong Choon is the only circus troupe left in Korea, the name will remain,” said Moon. But he was anxious that most of the performers would be from other countries like China and Russia.
Currently, the Arts Council of Korea helps to fund Dong Choon.
“Every September, various art groups apply for a funding and Dong Choon is one of them,” said Jung Hae-young, the Interdisciplinary Art Manager of the Council. “Dong Choon has been receiving 15 million to 40 million won every year.”
Jung said that aid is necessary to preserve Korea’s last circus troupe.
Apart from the funding, “The troupe must find a way out of the vicious cycle it is trapped in by establishing a more stable environment for the performers,” said Moon.
The troupe does not have departments such as marketing or PR. “I do everything,” said Park. “Instead of spending money on recruiting employees, I’d rather hunt for young performers.” Financial struggles and unreliable employees have also made Park wary. A few years ago he employed a PR manager, but he soon left the company without notice, said Park. He later found out that the employee had opened his own arts company.
“This year is very important,” said Park. “Depending on how much support we get from the people, we either live or die.”
Park dreams of staging a performance based upon traditional Korean arts.
“The performance will start off with a girl wearing a hanbok [Korean traditional costume] dancing to the rhythms of a pungmul [a farmer’s instrumental performance],” said Park. “On the other side of the stage, performers will be walking on tightropes, flying through the air. In the final act, they will juggle under the moonlight, swinging their bodies to the tones of chang [traditional narrative song].”
Park finds his plan inspiring. In an age of YouTube, DVDs and computer games, it remains to be seen if the public will share his passion.